Incorporation of the Church of Scientology European Office for Public Affairs and Human Rights as a legal entity now provides Scientology a more effective, transparent and appropriate dialogue with the various European institutions 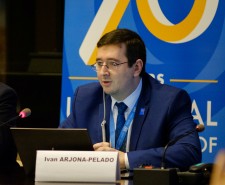 BRUSSELS, July 26, 2019 (Newswire.com) - ​​The Ministry of Justice of Spain has registered the Church of Scientology European Office for Public Affairs and Human Rights as a Religious Organization.

Established in Madrid, the corporation, representing Scientologists living in 37 member states of the Council of Europe, operates across Europe and beyond, with headquarters in Brussels and offices in many European cities, including Berlin, Copenhagen, Geneva, Paris, Strasbourg, Rome, Vienna and Warsaw.

First established in the early 1990s in Brussels to deal with public affairs and human rights in geographic and political Europe and to dialogue with EU official institutions and contribute to European values, the Office reflects the religion’s commitment to religious freedom and human rights. Since its inception, the Church has promoted the values enshrined in the European Convention on Human Rights and protected by the European Union Charter of Fundamental Rights.

“Europe is evolving toward a more fair and democratic society,” said European Office for Public Affairs and Human Rights Director Ivan Arjona, “where all citizens and nations grant greater importance to fundamental rights, contributing to stronger and more fruitful cooperation among nations in Europe.”

As expressed in Article 17 of the Treaty of the Functioning of the European Union (TFEU), the European Union “respects and does not prejudice the status under national law of churches and religious associations or communities in the Member States” and “recognizes their identity and their specific contribution.” It “maintains an open, transparent and regular dialogue with these churches and organizations.”

Europe is evolving toward a more fair and democratic society, where all citizens and nations grant greater importance to fundamental rights, contributing to stronger and more fruitful cooperation among nations in Europe.

To better contribute to this dialogue, the Church of Scientologyregistered with the European Union Transparency Registry on July 18, 2017, with number 872253227782-36 in the Registry’s section of “Organizations representing churches and religious communities.”

The Office has since been involved in debates on relevant issues at the European Parliament, having achieved official accreditation as a representative of the Church of Scientology on October 13, 2018.

Incorporation of the Church of Scientology European Office for Public Affairs and Human Rights as a legal entity now provides Scientology a more effective, transparent and appropriate dialogue with the various European institutions, fulfilling, thus, the formal requirements in the 2013 Guidelines for implementation of Article 17 of the TFEU.

Recognized as a religious organization by the Spain Ministry of Justice, Article 2 of the Church statutes, filed with its application, confirms the commitment of the Office to “… the European values of Human Dignity, Freedom, Democracy, Equality/Equity, the Rule of Law and Human Rights.”

The approved statutes establish the office’s territorial scope as “national and European,” acting as “an entity of reference for the entire European territory” and operating as “a purely religious, non-profit organization, which shall be responsible for carrying out its own activities and act as a representative for the various Churches in Europe before national and supranational public and private institutions, fostering that which is set forth in article 17 of the Treaty on the Functioning of the European Union and pursuant to article 2.2 of the [Spanish] Organic Law on Religious Freedom.”

By representing other religious entities or Churches of other nations in Europe whose purpose is to practice, teach and disseminate the Scientology religion and engage in the practice or dissemination of the doctrines of L. Ron Hubbard for the benefit of all members of society, the Office also seeks to ensure the promotion and protection of the diverse and historical traditional and cultural values and beliefs of the continent. The Office does so through the implementation at all levels of secular programs promoting values, fundamental rights, drug prevention and culture, and to aid local, regional, national and European institutions in the general public interest regardless of race, color, sex, nationality or belief.

The growing community of Scientology Churches, Missions, groups and social betterment corporations surpasses 11,000 in more than 170 countries and is now represented at the various European Institutions and the United Nations.

For more information, contact
​Media Relations of the Church of Scientology International
mediarelations@churchofscientology.net