The Church of Scientology opened its multi-platform, motion picture and television studio Saturday, May 28, in Hollywood, to a crowd of some 10,000 Scientologists and guests. 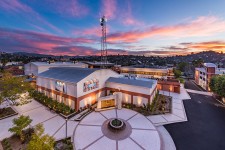 Hollywood, California, May 31, 2016 (Newswire.com) - ​​With the opening of Scientology Media Productions May 28, the Church of Scientology is poised to harness the power of all media to reach anyone, anywhere, with a fully integrated digital media production center for TV, Internet and magazines.

In opening the Center, Mr. David Miscavige, Chairman of the Board Religious Technology Center, said "It’s a history L. Ron Hubbard himself laid into Scientology—to share what wisdom we possess, to help others to help themselves. And, what goes with the territory: to ignore the catcalls from those who claim that Man cannot be understood, cannot be helped. But, we know different. We know Man can be helped. And even more than that, we know how to do it.”

In addition to being an evolutionary advance for the Scientology religion, SMP is a generous gift to the community. “We also open our doors to humanitarian organizations, charities and religions of every denomination in Los Angeles,” Mr. Miscavige said. “Our facilities will be open for all manner of community events, telethons, religious programming of all faiths, you name it.”

The editorial headquarters of Freedom Magazine, which produces hard-hitting human interest and investigative stories, are also housed at SMP. Freedom itself is being expanded as a global news organization that encompasses print, television, radio and Internet platforms.

The studio’s international media clearinghouse, accessible throughout the facility’s broadcasting, audio and publication operations, is linked at its core by 27 miles of fiber optic cable connecting a cluster of super computers with a combined capacity of 3.2 million gigabytes of information and media platforms, distributed to proprietary databases for instant translation.

Scientology Media Productions will be the nerve center spreading the Church’s message to the world, and a resource to the ever-growing number of Scientology Churches, humanitarian endeavors and social betterment programs throughout the globe.

Scientology 'Stay Well' Initiative Backs Up Denmark's New Normal
Denmark was the first country in Europe to ease coronavirus restrictions. But the pandemic left many concerned. Scientology Volunteer Ministers help their communities understand the basics of prevention and how they can keep themselves and others well.
Scientology - Jun 13, 2020

Scientologists Take Action to Help Harlem Stay Well
With Harlem about to reopen, Scientology Volunteer Ministers took to the streets with important information to help the neighborhood avoid a second wave of the COVID-19 pandemic
Scientology - Jun 8, 2020

Keeping Down the COVID-19 Numbers in Tokyo
Japan has reported fewer deaths from COVID-19 than other major nations—and they plan to keep it that way. The Stay Well Campaign of the Church of Scientology has been embraced by businesses and nonprofits as a way of ensuring this happens.
Scientology - Jun 4, 2020
Newswire