Research scientist and philanthropist Dr. Richard Komp reveals that virtually all of the more than a billion people who live without access to electricity could have power to light their homes and schools and run their hospitals. 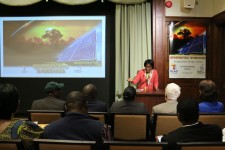 Washington, DC, April 15, 2016 (Newswire.com) - Nearly a billion people subsist on $1.90 or less a day and 1.2 billion people live without access to electricity—nearly all of them in developing countries. The barrier to accomplishing universal access to electricity is purported to be finance, with the World Bank estimating it will take between $40 billion and $100 billion annually to achieve that goal. But energy pioneer Dr. Richard Komp stated otherwise in his presentation April 2 at the Church of Scientology National Affairs Office in Washington, D.C., titled Empowering People to Power Africa.

Dr. Komp is co-founder and director of Skyheat, a Maine-based nonprofit that works all over the United States and the world to promote research and development, education, and public awareness and use of solar and other renewable, non-polluting energy sources as well as energy conservation and positive environmental practices. He has developed a cost-effective way to provide energy to these underserved communities.

The seminar was co-hosted by the Partnership League for Africa’s Development (PLAD) and Youth for Human Rights International (YHRI).

Dr. Komp explained how, using discoveries and innovations he has developed, individuals and communities can harness solar power to light and power their homes and businesses. With just the building materials they can find in their own backyards and open air markets they can completely transform their lives.

He has taught the process to villagers in South Africa, Mali, Rwanda, Niger, Ghana, Colombia, Haiti, Chile, Nicaragua, Pakistan and India. And they have used it to light homes, schools, churches and hospitals at incredibly low cost, without the need for massive industrialization, the laying of wires or other costly and impossible requirements.

He teaches innovative ways to build solar panels using cells from solar companies no longer in business in the United States and local materials in those developing countries. And he shows the villagers how to construct and repair existing solar panels, making them entirely self-reliant.  They can then transfer that knowledge to future generations, building capacity in renewable energy.

Dr. Komp explained that solar energy is environmentally friendly, cost effective and simple, and he is dedicated to proving that energy is not only for those already with means, but for everyone.

He repeated a promise he made at his last presentation at the National Affairs Office two years ago: “I will help anyone who makes less than $2 a day for free.”

Dr. Komp constructed his own home in Harrington, Maine, all with solar energy technology, which has provided him free electricity for over 32 years.  The home serves as the headquarters for the nonprofit Skyheat Associates, of which Dr. Komp is co-founder and director.

Ms. Binta Terrie, founder of PLAD, spoke of the need for the African Diaspora and friends of Africa to come together to help address the systemic human rights issues in Africa.  PLAD believes that human rights can be best addressed by improving social development through good governance, rule of law and democracy. The cornerstones of their strategy are education, health, agriculture and the environment.

Youth for Human Rights International, which co-organized the event, is a nonprofit organization that inspires youth to become advocates for tolerance and peace by educating them on the United Nations Universal Declaration of Human Rights.​