Church of Scientology Sacramento chose the truth about marijuana as the theme of their World Health Day open house and forum. The Church supports one of the world's largest nongovernmental drug education initiatives. 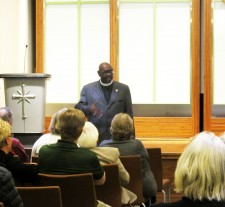 Sacramento, CA, April 20, 2016 (Newswire.com) - The Church of Scientology hosted a World Health Day open house and forum to educate community leaders on some of the disturbing information coming to light on marijuana. The program was organized by the local chapter of the Foundation for a Drug-Free World, a secular drug education and prevention program supported by the Church of Scientology.

With the title “Truth About Marijuana,” the forum featured presentations by Project SAM (Smart Approaches to Marijuana) and a detective from the Sacramento Sheriff’s Narcotics division, with closing comments by Bishop Ron Allen of the Sacramento-based International Faith Based Coalition. They offered a frank and open look at marijuana in the California capital.

In his presentation, the project SAM representative spoke of young people not knowing that today's marijuana is not like that smoked in Woodstock in the 60s. The potency of the psychoactive ingredient in marijuana—THC—has increased almost six-fold in average during the past forty years. And while it is disputed whether or not marijuana is a gateway drug, 99 percent of people who are addicted to other drugs started with alcohol and marijuana.

MC Mike Klagenberg, President of the Church of Scientology Sacramento, briefed the forum on the work of the Foundation for a Drug-Free World, and that their educational materials are available free of charge to educators, mentors, parents and others involved in drug education. He screened “The Truth About Marijuana” chapter of The Truth About Drugs:Real People—Real Stories documentary for forum attendees. “I ended up being addicted to heroin, coke, meth…I’ve done it all. And it all started with pot,” says one of the former addicts who tells his story in the film.

A local sheriff’s narcotics detective briefed the audience on illegal marijuana grows and their relationship to home invasion robberies and homicides, and he gave them a glimpse of the brutality of those growing marijuana.

Bishop Allen of the Faith Based Coalition reminded the audience that “drugs and drug abuse have no religious preference” and urged the community to come together to discourage drug use.

In closing the event, Klagenburg stated, “The inescapable conclusion from this event is that drugs and drug abuse are related to crime and violence and if we address the underlying drug issue with proper education and advocacy we can set our sights on creating that safer society we all desire.”