Scientology Nashville Partners With Health Leaders in the Fight Against Drugs

The Church of Scientology Nashville, in partnership with Drug-Free Tennessee, held a forum for the community on International Day Against Drug Abuse to coordinate efforts to keep young people away from drugs. 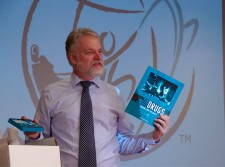 NASHVILLE, Tenn., June 27, 2019 (Newswire.com) - Aiming for an international society free of drug abuse, the United Nations named June 26 as International Day against Drug Abuse and Illicit Trafficking. In keeping with the purpose of the day, the Church of Scientology, in partnership with Drug-Free Tennessee, held “How to Keep Our Youth Off Drugs” — a breakfast forum at the church.

“When it comes to preventing drug abuse, we can only make great strides if we all work together,” said Rev. Brian Fesler, regional coordinator for Drug-Free Tennessee.

Health leaders attending the forum were impressed with the materials that were showcased including the complete educator’s guide which can help to prevent drug abuse. They were eager to use the materials to bring this drug prevention program to the broader community.

In 1987, immediately after establishing the International Day Against Drug Abuse and Illicit Trafficking, the UN passed resolution 42/113 stating that the UN General Assembly acknowledged “the effectiveness of human, moral and spiritual values for preventing the consumption of narcotic drugs” and called on governments “to take the necessary measures to reduce significantly the illicit demand for drugs and psychotropic substances with the aim of creating in society a deep respect for its own health, fitness and well-being and to provide appropriate information and advice for all sectors of their communities with regard to drug abuse, its harmful effects and the way in which appropriate community action can be promoted.”

Dedicated to accomplishing this, Foundation for a Drug-Free World has produced an entire curriculum to educate people of all ages on the harmful effects of drugs.

The Church of Scientology and its members support the Foundation for a Drug-Free World, a secular nonprofit corporation that empowers youth and adults with factual information about drugs so they can make informed decisions to live drug-free. The Foundation’s Truth About Drugs campaign is one of the world’s largest nongovernmental drug education and prevention initiatives. As shown on a series of programs on the Scientology Network, this support makes it possible for the foundation to provide drug education booklets, videos and educator guides free of charge to teachers, mentors and civic and community leaders.

Tags: Church of Scientology Nashville, Foundation for a Drug-Free World, Truth About Drugs