The Church of Scientology in Nashville opened its doors to all religious communities for a special service in observance of World Interfaith Harmony Week. 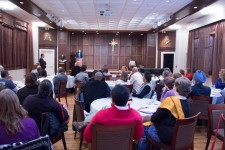 Nashville, Tennessee, February 9, 2017 (Newswire.com) - Unity was the watchword at the Nashville Church of Scientology February 1 where religious leaders held an interfaith service to help bring people together in harmony.

“These are times that call for all of us to be united as one, not stand apart,” said Rev. Brian Fesler, pastor of the church and organizer of the interfaith service. “Everyone in this room has a different background, a different faith tradition, but they are all my friends.

Hate graffiti, death threats, and violence toward people of religion have become recurrent mainstream news. A recent Washington Post headline reads “FBI is looking into bomb threats at Jewish centers in the United States, Britain.” A Florida man pleaded no contest and was sentenced February 6 to 30 years in prison for setting fire last June to the mosque where Orlando nightclub shooter Omar Mateen once worshipped. And according to a recent analysis, anti-Muslim hate crimes reported in California rose 122 percent between 2014 and 2015.

“To truly combat religious discrimination in this day and age, we have to come together and learn about the religious other,” said Rev. Fesler.

Members of diverse religions spoke of why it is important to them and their faith that all people come together in unity. Those represented included Sikhs, Baha’is, Baptists, Latter-day Saints, Scientologists, Buddhists, Catholics, and Muslims.

The service was held in observance of World Interfaith Harmony Week February 1–7, proclaimed October 21, 2010, by the United Nations General Assembly to promote harmony between all people regardless of their faith.

“It is part of our very fabric to support others’ rights and abilities to practice their religion in peace,” said Rev. Fesler who pointed out that the Creed of the Church of Scientology begins with the words “We of the Church believe that all men of whatever race, color or creed were created with equal rights. That all men have inalienable rights to their own religious practices and their performance."

In a world where conflicts are often traceable to intolerance of others’ religious beliefs and practices, the Church of Scientology has, for more than 50 years, made the preservation of religious liberty an overriding concern.  The Scientology Religion website includes extensive information on the freedom of religion and belief, a blog that covers religious freedom issues, and the various international covenants that protect this right.

Scientology Volunteer Ministers: Supporting Kids as They Start a New School Year Online
Volunteers from the Church of Scientology Seattle help local kids get a great start to the new school year, virtually, through their participation in the 7th annual backpack and school supplies drive sponsored by Interfaith Ministries of Greater Queen Anne.
Scientology - Aug 4, 2020