New NGO status enables MEJORA, the Foundation for the Improvement of Life, Culture and Society, to contribute to achieving the goals of the UN Economic and Social Council and the humanitarian aims of the Scientology religion. 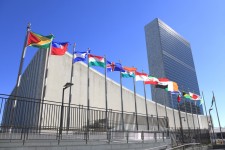 BRUSSELS, August 8, 2019 (Newswire.com) - Mejora means “improvement” in Spanish, and Fundacion MEJORA is an apt name for the organization that has just achieved Special Consultative Status to the United Nations. Its full name is Fundacion MEJORA: Foundation for the Improvement of Life, Culture and Society, and MEJORA’s new NGO status provides the Church of Scientology with greater opportunity to contribute directly to the accomplishment of the goals of the United Nations Economic and Social Council, ECOSOC, one of the six principal organs of the United Nations.

Founded in 2015 by the Church of Scientology of Spain, MEJORA is registered in that country’s National Registry of Foundations.

In applying to the UN, the foundation affirmed its commitment to:

“human development through respect for and observation of Universal Human Rights, as well as the application of core values, such as human rights, equality, tolerance, respect for human life, peace, democracy and individual freedom.”

MEJORA's mission is to “defend, promote, teach and disseminate Human Rights as included in the Spanish Constitution, as well as the Universal Declaration of Human Rights and other international covenants to promote pragmatic Scientology values and practices developed by Scientology Founder L. Ron Hubbard, aimed at improvement of the individual and society, and to promote tolerance in all aspects of civil society.”

At the European level, the Foundation is registered in the Transparency Register of the European Union. MEJORA actively participates in the Faith and Freedom Summit NGO coalition, whose last event was held at the European Parliament in Brussels. MEJORA also takes part in numerous other initiatives, events and conferences in furthering its mission.

With this recognition, the Foundation now has official representation at the UN in Geneva, Vienna and New York, with the ability to present written and oral statements to various organs, such as the UN Human Rights Council, and to organize conferences of its own within the United Nations. This year marks MEJORA’s sixth annual Religious Freedom Awards presentation, scheduled for September 6. Awardees include scholars and officials active in promoting the freedom of religion or belief.