Scientologists March in Hungary for the Religious Freedom of All

Some 1,500 Scientologists from across Europe marched in Budapest in support of religious freedom for Scientology in Hungary and for members of all faiths that have come under attack through Hungary's new religion law. 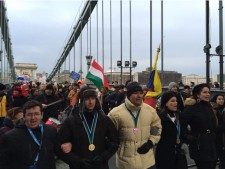 BUDAPEST, Hungary, December 21, 2017 (Newswire.com) - Scientologists from 27 countries gathered in Budapest, Hungary, Dec. 9 to protest the suppression of religious freedom in the country.

Some 1,500 Scientologists gathered at Deák Ferenc Square and marched to the Palace of Alexander — residence of the Hungarian president. There, they read a proclamation on the importance of the United Nations Universal Declaration of Human Rights (UDHR) whose 69th anniversary would be celebrated around the world the following day. Notable among the 30 articles enshrined in the UDHR is freedom of religion — a right that is violated by Hungary’s new religion law.

Among those marching was former Miss World Venezuela, actress Ruddy Rodriguez. A prominent Scientologist active in Church-sponsored humanitarian campaigns, she spoke of religious tolerance as a cornerstone to peace.

“The truth cannot be obscured for long…because it will manifest either gently or explosively,” said celebrated Hungarian author, István Nemere, who lived through the years of repression of Hungary’s Communist dictatorship.

“We have come to a crossroad for religious freedom in Hungary,” said Attila Miklovicz, Director of Public Affairs of the Church of Scientology Budapest. “This is the same situation we experienced 80 years ago. What must now be determined is whether we turn toward freedom and peace or return to the new dark age of discrimination.”

Miklovicz was referring to the 2011 decision by the Viktor Orbán government to disenfranchise hundreds of religions, including the Church of Scientology, stripping them of their official recognition and tax exemption.

At Alexander Palace, Miklovicz delivered a prepared speech, a copy of which was presented to the president’s office, along with a special edition of The Way to Happiness, the nonreligious common sense moral code written by humanitarian and Scientology Founder L. Ron Hubbard. The book includes the precept “Support a Government Designed and Run For all the People,” which states “Unscrupulous and evil men and groups can usurp the power of government and use it to their own ends...The way to happiness is hard to travel when shadowed with the oppression of tyranny. A benign government, designed and run for all the people, has been known to smooth the way: when such occurs, it deserves support.”

“We are a peaceful, honest and open religious movement,” said Scientologist Timea Vojtilla, a leading member of the Hungarian Scientology community. “We want the government to ensure true religious freedom, and not let certain agencies hinder the free exercise of our religion.”

The demonstration ended with the reading of the Creed of the Church of Scientology, which includes the belief held by all Scientologists, “That all men have inalienable rights to their own religious practices and their performance.” 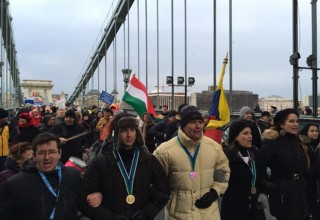 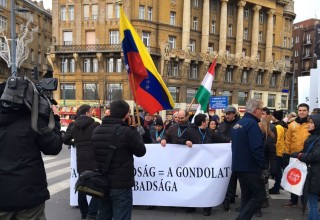 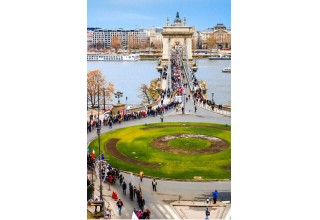 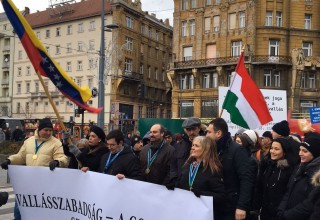