As the finale of their year-long drug prevention initiative, Scientologists and their community partners roll out a record-breaking day of drug education in support of UN International Day Against Drug Abuse and Illicit Trafficking.

LOS ANGELES, June 26, 2018 (Newswire.com) - Last year’s World Drug Report estimated a quarter of a billion people used drugs at least once in 2015. Some 29.5 million were problem users, and globally, there were an estimated 190,900 drug-related deaths. No country is immune to the drug abuse epidemic. It requires a global solution.

To reverse this and drive forward the goal of a drug-free world, the past year has seen an explosion in the use of the Truth About Drugs campaign, with educators, police, military organizations, community, religious and volunteer groups and individuals active in 197 countries and territories.

In his annual message for the day, UN Secretary-General António Guterres states, “Drug challenges are among the most complex problems we face, with wide-ranging impacts on health and well-being, families and communities, security and sustainable development..…Addressing them requires a holistic focus across many fronts.”

In keeping with Mr. Guterres’ message and the purpose of this day, Scientology Churches around the world are holding community drug prevention open house events and forums. These programs bring together local leaders concerned with the issue, provide resources and help to craft citywide and regional drug prevention strategies that maximize results through coordinated activity.

Drug-Free World chapters the world over mark this day with drug education booths, marches and parades, sports events and other programs to raise awareness of the danger of drugs and encourage others to join in the movement to rid communities of drug abuse and addiction.

Despite the extent and severity of the problem, the Truth About Drugs initiative offers hope in the form of results:

One American police officer who works as a school resource officer teamed up with the school’s health teacher to reach as many kids as possible. The program includes before-and-after surveys to measure the effectiveness of the activity. “When I saw the ’post’ surveys, I was amazed at how much they paid attention,” he says. “Some of them fill up the whole survey and they’re writing in the margins and they’re writing on the top. That’s what’s good about working with kids. You can change the outcome — you can change the outcome in that person’s life.”

“When we visited one community,” says the head of the Port Harcourt, Nigeria chapter of the Foundation, “about 50 drug addicts decided to quit smoking marijuana.” He then followed up with them to make sure they received any help they needed to hold to their decision.

A Philippines police official partnering with the organization said, “Thank you very much to the members of the Foundation for a Drug-Free World for helping and supporting us — the Filipino people — to eradicate drug abuse...This is something worthy to treasure and remember.”

Tags: Church of Scientology, Foundation for a Drug-Free World, International Day Against Drug Abuse and Illicit Trafficking, Truth About Drugs 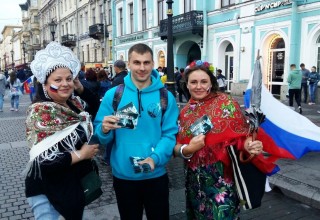 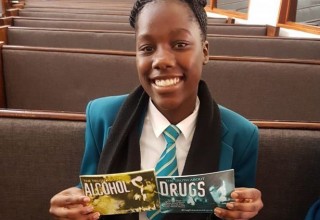 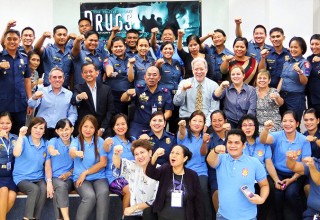