Costumes, performances, gaming, and discussion panels provide a selection of over 100 activity choices scheduled to take place at Infinicon, the summer convention being held at the Crowne Plaza Hotel on August 5th through 7th in Dallas, Texas. 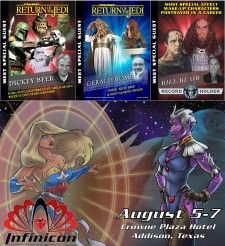 DALLAS, TEXAS, July 25, 2016 (Newswire.com) - Costumes, performances, gaming, and discussion panels provide a selection of over 100 activity choices scheduled to take place at Infinicon, the summer convention being held at the Crowne Plaza Hotel on August 5th through 7th in Dallas, Texas. Celebrity guests and guests of honor from filmmaking and costuming will be present all three days. Additional highlights include an art show, artists, exhibitors, and specialty vendors.

A head-to-head tournament of costumes on Friday awards a Brother brand embroidery sewing machine to the champion. The reserve champion receives a Brother sewing serger. Saturday features a traditional Cosplay contest hosted and produced by the CosPod podcast. The list of Cosplay prize sponsors is topped by ALL-CON Dallas, AMACO (American Art and Clay Company), Golden D’or, and McCall’s Patterns.

All three days offer console gaming competitions by The Slurred Nerd. Daily tournaments have $300 cash in combined prizes. Sunday’s tournament is exclusively for kids 14 and under with the top two winners taking home an SYMA X5C drone and an RCA Voyager II quad core tablet, respectively. Fans of steampunk will enjoy a full track of content provided by Mad Raven Productions. The JediCole Universe has produced unique game shows to challenge contestants nerd and fan culture knowledge and skills.

Celebrity guests include Dickey Beer who played Boba Fett, a Biker Scout, Barada, a Stormtrooper, and Gammorrean Guard in Star Wars Return of the Jedi. Also from Return of the Jedi, Gerald Home is making a rare U.S. appearance. Mr. Home played Tessek / Squid Head from Jabba's Palace and a Mon Calamari Office from Admiral Ackbar's Bridge. Bill Blair, the world record holder for "Most Special Effects Characters Played in a Career" will be signing autographs from Babylon 5, Deep Space 9, Star Trek Enterprise, and many, many more fan favorites.

Taffeta Darling stars as Infinicon's 2016 Cosplay Guest of the year. Starting out as a pinup model and cosplayer, Taffeta was nominated and won Sam Johnson's coveted "Fan Babe of the Year for 2010", and was a top three finalist in the "Hot Rods and Heels" Texas Pin-Up Model of the Year for 2011. She created the YouTube channel: "FanGirls" which features DIY video discussions and reviews on video games, comics, novels, movies, conventions and other pop culture musts.

Christopher R. Mihm is the writer, director, and producer of the films of the "Mihmiverse," a series of award-winning, loosely interlinked feature-length films which pay homage to 1950s-era "drive-in cinema."  Since his first film, “The Monster of Phantom Lake”, Mr. Mihm has released one new as-authentic-as-possible 1950s-style feature a year, many of which have received numerous accolades, nominations, and awards. “Attack of the Moon Zombies” raked in the most 2011 Dead Letter Awards at mailorderzombie.com. “House of Ghosts” beat out several big budget films to win the coveted Rondo Hatton Classic Horror Award for Best Independent Feature in 2012. Mr. Mihm's ode to the "big bug" films of the 1950s, “The Giant Spider,” won the Forrest J. Ackerman Film Award at the Famous Monsters of Filmland Film Festival and the Best Action/Horror Feature award at the Highway 61 Film Festival. Mr. Mihm will be screening a double feature from his works Saturday night at the convention.

Darwin Prophet and the Chronus Mirror are the featured performance guests. Darwin, with her companions Maestro on violin and DarKrys on viola, voice and percussion, bring you Literary Rock in vibrant aural exhibitions. Transforming myth and legend of yestermorrows into songs of timeless beauty, DPCM blends ethereal groove and aesthetic charm with a touch of steam in a dance of concentric infinity.

Volunteer participation opportunities may be applied for from the main convention and ticketing website in advance of the convention. This opportunity for a backstage view is said to get attendees as close or closer to key events as VIP access receives in some instances.

Content starts at 10am daily. Events run hourly until midnight on Friday; 2am Saturday; and 5pm on Sunday. Special room rates for convention attendees are offered by the Crowne Plaza Hotel at 14315 Midway Road in Addison (North Dallas), where the event is taking place.

Activities, performances, and competitions are all included with ticketed entrance. The number of participant positions and seating per event must be limited by per-feature capacity. Advance tickets are available at www.Infinicon.net or at the door during the convention. Groupon also offers a limited number of 3-day tickets.