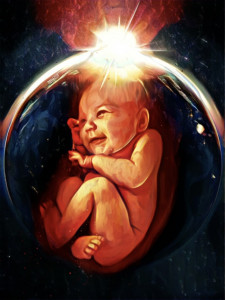 LOS ANGELES, September 14, 2021 (Newswire.com) - Moriartsy's "Child of Earth" is one of 51 digital artworks skyrocketing to space from NASA's Kennedy Space Center on Sept. 15 as part of Inspiration4, the first all-civilian mission to orbit. The Non-Fungible Token (NFT) will be auctioned on Origin Protocol's NFT platform as part of a $200 million fundraising effort for St. Jude Children's Research Hospital. Other items donated include the first-ever minted NFT song to be played in orbit, created by the Grammy Award-winning rock band Kings of Leon.

Arick Salmea, who goes by Moriartsy in the art world, recently joined multifaceted creative boutique Schofield's Flowers as Executive Creative Director/Partner. It is through the agency's founder Steve "Scof" Schofield that he was introduced to NFT collector Kyle Schember of Subtractive, which plays a key role in orchestrating the ambitious in-flight charity auction.

"Moriartsy has that rare voice capable of reflecting a moment in history that becomes timeless in an instant," said Schofield. The artwork, which shows a baby encased by the earth as if it were a womb, has a personal touch, but suggests "a global perspective on our humanity, our vulnerability and our connection to the planet," said Moriartsy, whose postmodern surrealist pieces have caught the attention of Carole Baskin, Susaye Greene of The Supremes, and MC Hammer on Instagram, a popular platform for NFT promotion. Five of his pieces were also featured in Beijing's first NFT show Stratosphere NFT Art International in July 2021.

"Life takes unexpected turns, including the challenges many of us have faced during the pandemic," Moriartsy noted. In early April of this year, he transformed his garage into an art studio and immersed himself in the digital art form, creating his own unique style. He generated one NFT art piece each day, including adapting an image of his daughter shortly after she was born to create "Child of Earth." "I never gave up, and that's what this mission and this fundraiser represent to me."

The three-day mission into orbit was organized through Elon Musk's Space Exploration firm SpaceX and funded by Jared Isaacman, Shift4 Payments CEO and commander of Inspiration4. "Child of Earth" will be launching alongside other items and artifacts donated to St. Jude, including a ukulele from Martin Guitar, which will be played in orbit, 66 pounds of hops that will be brewed into "space beer" by Samuel Adams upon return, and a never-before-released performance of "Time in Disguise" by Kings of Leon.

To participate in the auction, go to "Child of Earth" at https://nft.goingtospace.com/#/auction/120.

Moriartsy's artworks are also available for purchase on OpenSea, Foundation, and Rarible.