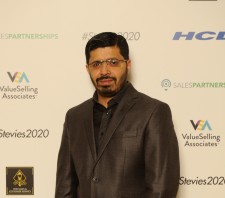 NEW YORK, March 16, 2020 (Newswire.com) - The Executive Chairman of the Stevie® Awards, Michael Gallagher, has invited Technology Trailblazer Satish Kumar Boguda to chair the "New Product & Technology Awards Judging Committee" of the 2020 - 7th annual Asia-Pacific Stevie Awards, which will continue to run through April 5, 2020. The winners of the Gold, Silver and Bronze Stevie trophies throughout various categories will be awarded at the Lotte Hotel in Hanoi, Vietnam, on Friday, May 29, 2020.

The Asia-Pacific Stevie Awards are the leading accolades recognizing innovation, during which the world's most successful organizations and personalities with phenomenal achievements in 29 countries of the Asia-Pacific region will be nominated for awards, including large, small, public, private, profit and non-profit organizations of all groups throughout the region.

With myriad successes within his portfolio, Mr. Boguda is among the world's most respected technology pioneers, recognized by international officials and prestigious organizations for his competence, commitment and outstanding contributions across the globe. He is currently chairing the jury panel, comprised of prominent business executives and individuals with significant achievements. He, along with 100 judges worldwide, will evaluate the nominations, and their overall rating will then determine the winners of the 7th annual Asia-Pacific Stevie Awards.

“I am super proud to be able to Chair the New Product & Technology Awards judging committee, leading some of the world’s most successful executives for these coveted industry awards,” said Satish Kumar Boguda. “This accolade is extremely gratifying, as it is like rocket fuel for me, ensuring a purposeful and productive journey that really empowers me to push the limits and compete globally.”

Satish Kumar Boguda is a technology evangelist who continues to live his life at the nexus of People and Innovation. He has been honored with various international awards for his significant contribution to the global technology design focused on innovation. Mr. Boguda has been invited to join as an expert jury member for numerous international competitions and awards. As a technology specialist, Mr.Boguda helps to make full advantage of the modern technology patterns in and out for various international conferences, journals and prominent entities. He is currently working as a senior software developer for Dynamic Enterprise Solutions Inc. and can be reached at Linkedin.

About the Stevie® Awards