Sarah Abdulaziz Chosen by the Saudi Government to Present the Opening of Al-Ula in Paris, France

The famous Spanish & Saudi TV Host, Actress, and Model presented worldwide the opening of Saudi Arabia to Tourism the 7th of October 2019. 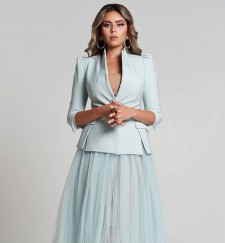 PARIS, November 3, 2019 (Newswire.com) - A major event presenting the opening of Saudi Arabia Tourism to the world was held by The Royal Commission: "AlUla, Marvel of Arabia" at the prestigious Arab World Institute in Paris, this 7th of October 2019.

This exhibition was officially inaugurated by His Highness Prince Badr bin Mohammed ben Abdullah ben Farhan al Saud, Minister of Culture of the Kingdom of Saudi Arabia and Governor of the RCU, Mr. Franck Riester, Minister of Culture and Mr. Jack Lang, president of IMA.

The occasion included guests from the worlds of archeology, arts, culture, including the architect Jean Nouvel, Irina Bokova, former Director-General of UNESCO and ​Sarah Abdulaziz the famous Spanish/Saudi TV Host, in the Gulf Cooperation Council which had the honor to present this lavish ceremony, presenting the event in English, Arab and French.

Sarah described this exceptional moment as an invitation to the world to preserve an archaeological heritage, strike a balance between ambition and responsibility for future generations.

@sarahbintabdulaziz is one of the most famous TV hosts in Saudi Arabia and in the UAE, working in prime time shows for MBC (Middle East Broadcasting Corporation) in Dubai, the biggest channel across the Middle East for news, political, cultural, entertainment shows.

Sarah is a symbol inside and outside her country as well as Role Model, creating trends for a long time now. She has also been partnering with the UAE Government in the past years on philanthropic projects, receiving numerous prestigious awards as well as published in many magazines.

For the last 3 years in a row, MBC has selected her to host the Saudi National Day Live show. In September 2018, on SBC (Saudi Broadcasting Channel), she was the first woman in the history of Saudi to host the first TV Talent Singer Show, filling a space that was never held by a woman in the country.

Since last 26th October, she has been on SBC presenting a new type TV Show every Saturday 18hpm (Saudi Time) for all of the Middle East, where she talks about all the new trends in Social Media, Life Style, Tourism, Video games, Technology, Hollywood Movies, Music and International Celebrities.

She is seen in other TV show collaborations between Europe and the Gulf Cooperation Council and also with fashion designers as @michael5inco among others.