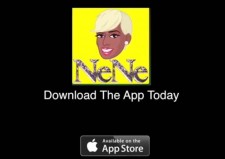 Atlanta, GA, June 13, 2016 (Newswire.com) - Leakes, Inc. along with the software development division of Atlanta based Sapp & Sapp, LLC have collaborated to create the newly released app NeNe Leakes: The App for iPhone and iPad.  The app features NeNe inspired NE’mojis that include several of her often said and often repeated sayings such as BLOOP!, SO NASTY, SO RUDE and GIRL BYE!

NeNe Leakes: The App offers original and exclusive NE’mojis available in app, there are also several in app stickers and a special Dressing Room feature that allows users to dress NeNe while mixing and matching clothing items taken from NeNe’s very own closet as well as some of her most iconic red carpet glamorous looks from events ranging from The Golden Globes and The Emmys and Hollywood’s hottest A-List parties. In addition to making NeNe Red Carpet Ready, the Dressing Room feature also allows users to dress NeNe with their choice of her hairstyles, clothing outfits, shoes and accessories.

"Partnering with NeNe has been a dream come true. Her vibrant personality lends itself to the NE'Mojis we've been able to create and she offers a vast library of content to continually create new emoticons that truly are as special as NeNe herself,"

“I’ve been approached numerous times by a plethora of companies about having an App for fans to really be part of the NeNe experience but it was really important for this Georgia Peach to partner with an Atlanta based company.  I wanted to partner with a local company that would really understand how to make an App that was just as unique and fun as I am,” said NeNe Leakes.

“Partnering with NeNe has been a dream come true.  Her vibrant personality lends itself to the NE’mojis we’ve been able to create and she offers a vast library of content to continually create new emoticons that truly are as special as NeNe herself,” said App developer Lonnie Sapp.

In addition to the NE’mojis, Stickers and Dressing Room, the App features an embedded social media interface that seamlessly connects with social media accounts such as Facebook, Instagram and Twitter and email and messaging platforms simplifying sharing of in App created icons.