The world owes a debt of gratitude to emergency workers who risked their lives at the World Trade Center in 2001 and the many thousands more who continue to do so at disaster sites every day. 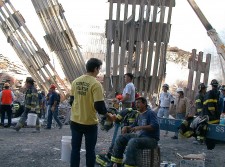 LOS ANGELES, California, September 12, 2020 (Newswire.com) - On the 19th anniversary of the collapse of the Twin Towers, in the year of COVID-19, with forest fires burning throughout California, and a record hurricane season in full play, Scientology Volunteer Ministers salute first responders and health care personnel who put their lives on the line to protect the lives of others.

9/11 served as a wakeup call to Volunteer Ministers everywhere. Within hours, they were on-site, providing support to emergency personnel and bringing order to the chaos.

“As any New Yorker would tell you, to see the Twin Towers erupt and then disintegrate was a living nightmare,” said one of the first Volunteer Ministers to arrive at the scene. “Over 25,000 people were gotten out of the towers because of the work of first responders, civilian fire wardens, strangers assisting others, police, firefighters, and those who made the ultimate sacrifice that day in service to others.”

Volunteer Ministers arrived from across the U.S. and abroad to help at Ground Zero. They cared for the physical needs of emergency workers with food, water and clothing. They helped exhausted police and firefighters cope with fatigue and shock using Scientology assists, techniques developed by Scientology Founder L. Ron Hubbard that address the emotional and spiritual factors in stress and trauma.

“Not only did 9/11 inspire Scientologists to become active Volunteer Ministers, it was also a turning point for volunteerism overall,” says Joava Good, Deputy Director of the Churches of Scientology Disaster Response. “Since then, the amount of collaboration among churches, nonprofits and government agencies has increased beyond anything we’ve ever seen before. If the intention of this outrage was to overwhelm us, to drive us into apathy, I believe it had the opposite effect—it brought people of goodwill everywhere together as a united team.”

This year, a novel coronavirus created an entirely different kind of disaster than any Volunteer Ministers had to confront before. The most effective measures were researched for ensuring the safety of Scientology staff and parishioners, and implemented internationally as protocols under the direction of Scientology ecclesiastical leader Mr. David Miscavige.

The Church of Scientology created the How to Stay Well Prevention Resource Center on the Scientology website and published three booklets containing the basic principles of prevention.

Volunteer Ministers from Scientology Churches and Missions across the globe distributed 5 million copies of these booklets to help their communities get through these trying times safe and well.

The Church of Scientology Volunteer Ministers program is a religious social service created in the mid-1970s by Scientology Founder L. Ron Hubbard.