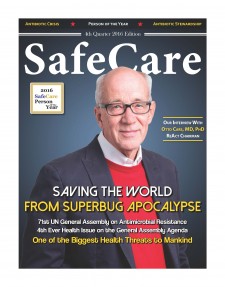 Lexington, KY, October 31, 2016 (Newswire.com) - ​​​SafeCare® Magazine announced today that Otto Cars, MD, PhD was awarded SafeCare Person of the Year for 2016. This award recognizes the one individual who contributed significantly towards improving patient safety and healthcare quality across the globe.

We congratulate the 2016 SafeCare Person of the Year - Dr. Cars.

“We congratulate the 2016 SafeCare Person of the Year – Dr. Cars,” said Yisrael M. Safeek, MD, MBA, Chairman and CEO of The SafeCare Group, publisher of SafeCare Magazine. “We are incredibly impressed with what he has accomplished in the area of antimicrobial resistance (AMR). For over 20 years, he has been spreading the word about the risks of AMR around the world. He and his independent international network ReAct (Action on Antibiotic Resistance) has disseminated evidenced-based information driving the issue of AMR toward political decisions. These efforts culminated with UN Member States convening for the first ever High-Level Meeting on AMR during the 71st UN General Assembly (UNGA). AMR is the fourth ever health issue to make it onto the agenda of the UNGA, only preceded by major global health issues such as HIV/AIDS, non-communicable diseases, and Ebola. Heads of States adopted a Political Declaration calling for coordinated, global action.”

The publication offers a unique voice by featuring individuals and articles that advance patient safety and inspire healthcare leaders to excel in providing safe care of the highest quality and value. SafeCare® Magazine, SafeCare Analytics®, and 100 SafeCare Hospitals® comprise The SafeCare Group®. Since 2012, SafeCare Analytics® have been helping hospitals excel with Joint Commission OPPE, readmissions, cost, complications and infections. Since 2013, 100 SafeCare Hospitals® listings recognize US hospitals that excelled in evidence-based areas that are required under section 3025 of the Affordable Care Act. For more information about The SafeCare Group, visit www.safecaregroup.com.

SafeCare® Magazine offers a unique voice by featuring individuals and articles that advance patient safety and inspire healthcare leaders to excel in providing safe care of the highest quality and value.