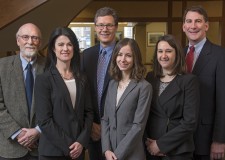 Mr. Davenport was formerly with the Massachusetts Department of Revenue (DOR) in various roles, including advisor to the Commissioner of Revenue, the Administration, and members of the Legislature with respect to tax policy and technical issues, and he provided policy and technical review and oversight for the Department’s litigation and regulatory functions.  Mr. Davenport also provided advice with respect to the many areas in which state tax laws intersect with federal and international tax laws.  He also served as Acting Deputy Commissioner for the Legislative/External Affairs & Policy Division (LEAP) during 2015-2016, and in that capacity, he provided management oversight for the DOR’s Office of Tax Policy Analysis, Rulings & Regulations Bureau, Office of Legislative Affairs, and Communications group.

To better serve its clients, RYP has also relocated its Boston office to the heart of the Financial District, which is the home to Mr. Davenport. The new office is located at 120 Water Street, Boston, Massachusetts.

The RYP Tax Practice is proud to continue to serve its multistate and multinational business clients throughout New England with their tax matters.  Members of RYP’s state and local tax practice regularly represent multistate clients on state tax matters in New Hampshire, Massachusetts and Vermont.  In addition, RYP’s tax professionals serve on the Board of Trustees for the New England State and Local Tax Forum, a non-profit organization dedicated to excellence in state and local tax policy and education.  RYP is also a sponsor of the Council on State Taxation (COST) in Washington D.C.

Rath, Young and Pignatelli, P.C. merges traditional legal practice areas with legislative and public policy expertise. We have earned a reputation for achieving client success through skillful and creative advocacy in private party negotiations, before courts, regulatory agencies and legislatures. Our professionals are leaders in key sectors of our economy where business and government intersect including business and finance, energy, tax, health care, environmental and insurance.

Gravity is on a mission to provide both marketing and sales support to companies that are looking for a streamlined and integrated approach to reaching their targets and developing new business opportunities. It's all about customer attraction.