Russian Volunteers Reach Youth With the Truth About Drugs

Bringing the truth about drugs to Russian children 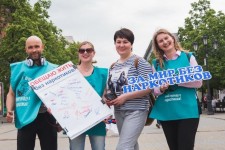 Chelyabinsk, Russia, June 30, 2017 (Newswire.com) - Just east of the Ural Mountains, on the border of Europe and Asia, drug prevention activists in the town of Chelyabinsk are capitalizing on the season’s long days and mild weather to reach youth with the truth about drugs.

According to a May 2017 report from the Minister of Public Security, drug-related deaths have increased by 600 percent, with 119 deaths so far this year compared with 20 in 2016.

Local volunteers from the Truth About Drugs initiative support the government’s efforts to fight this epidemic by reaching youth with factual information on drugs before they begin to experiment with these substances.

Drawing on 25 years of experience in drug prevention, the Truth About Drugs program has solved the problem of effectively communicating the reality of drug abuse to teens and young adults, individually and through mass communication.

Both experience and surveys show that teens and young adults are most likely to listen to their peers. Thus the core message is provided by young people—some of whom have gone down the path of addiction and survived to tell the story—who speak to other young people in booklets, public service announcements, and a documentary film.

The cornerstone of the program is a series of 13 fact-filled booklets that, without scare tactics, inform about drugs, empowering young people to make their own decisions to live drug-free.

The Church of Scientology and its members support the Truth About Drugs campaign, one of the world’s largest nongovernmental drug education and prevention initiatives. Thanks to this support, the Foundation for a Drug-Free World provides these drug education booklets, videos and educator guides free of charge to teachers, mentors and civic and community leaders.