Running to Raise Awareness on the Dangers of Drugs

Volunteers from the Foundation for a Drug-Free World Florida entered the Goodwill 5K Hippie Dash Race in St. Petersburg, Florida, to reach out with the truth about drugs. This is part of a campaign to help put an end to spiraling drug overdose deaths. 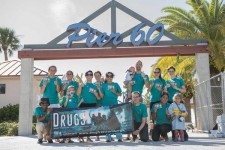 St. Petersburg, Florida, May 27, 2016 (Newswire.com) - A team of 28 volunteers from the Foundation for a Drug-Free World Florida ran in a St. Petersburg, Florida, 5K race to promote drug-free living to fellow runners and fans. A unique sports event, runners adorned with flowers in their hair and other 1960’s hippie paraphernalia compete in the Goodwill Hippie Dash 5K and its sister race the Flower Child Fun Run for kids.

While their teammates ran in the competition, other members for the Foundation set up a drug education booth on the sidelines where they distributed thousands of The Truth About Drugs booklets to runners and those who gathered to cheer them on.

"In 2015, more than 47,000 men and women died from drug overdoses. That is why we come out to events like this one and work to disseminate truth to our neighbors, friends and contacts to stem the tide of death and suffering caused by drugs."

“In 2015, more than 47,000 men and women died from drug overdoses,” said Julieta Santagostino, president of the Foundation for a Drug-Free World Florida. “That is why we come out to events like this one and work to disseminate truth to our neighbors, friends and contacts to stem the tide of death and suffering caused by drugs.”

The Foundation has also provided their The Truth About Drugs booklets, education kits and DVDs to thousands across Florida and have been held seminars, workshops and other programs to bring this information to the youth of the community.

Since the Grand Opening of the group’s headquarters in downtown Clearwater last July, more than 200 Florida schools and community organizations have adopted The Truth About Drugs program and are using these materials in their drug prevention programs.

The Church of Scientology supports the Foundation for a Drug-Free World, a nonprofit public benefit corporation that empowers youth and adults with factual information about drugs so they can make informed decisions to live drug-free.

Volunteers have distributed some 50 million drug prevention booklets and held tens of thousands of drug awareness events in some 180 countries and The Truth About Drugs public service announcements have aired on more than 500 television stations.

The United Nations on Drugs and Crime states, " For every dollar spent on prevention, at least ten can be saved in future health, social and crime costs."