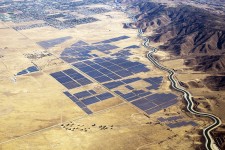 SAN JOSE, Calif., July 24, 2018 (Newswire.com) - More than 10,600 megawatts of solar power were installed last year in the United States, and local installer Rosendin Electric (Rosendin) has been recognized by Solar Power World magazine for its contributions to the industry. Rosendin achieved a rank of six out of 450 solar companies on the magazine's 2018 Top Solar Contractors list.

Being ranked the fourth-largest Solar EPC in the country and the fifth-largest Solar Contractor in California is a great achievement. Being ranked consistently year after year as one of the best in all solar categories is something we are extremely proud of at Rosendin. It is a testament to the commitment and dedication from a phenomenal team within the Rosendin Electric Renewable Energy Group.

"Solar Power World is very excited about the 2018 class of Top Solar Contractors," said Kelly Pickerel, editor in chief of Solar Power World. "Our 2017 list showed impressive installation numbers after 2016's huge rush to meet ITC requirements, and many companies were hesitant to show unavoidable installation dips after last year's high. We're happy to feature a strong group of thriving U.S. solar installers on the 2018 Top Solar Contractors list. These companies truly are at the top of their markets."

The U.S. solar market had its biggest year ever in 2016, installing more than 15,000 MW. Although installations in 2017 dropped to 10,608 MW, the total still represents 40 percent growth over 2015 numbers. The year-over-year downturn can be attributed to the large influx of 2016 projects rushing to meet the anticipated expiration of a 30 percent federal tax credit that was eventually renewed. Last year also saw uncertainty surrounding potential Section 201 tariffs on imported solar panels, which may have led to delayed or canceled projects. While Rosendin's utility-scale renewable energy project pipeline remains robust for the next two years, many of its IPP/Developer clients are pushing project start dates to later in 2018 and 2019 due to the uncertainty of solar module pricing.

A major highlight of 2017 was the non-residential market growing 28 percent year-over-year, the fourth straight year of annual growth for commercial, industrial and community solar. In addition to its utility-scale solar business, Rosendin continues to grow as an EPC of integrated solar and battery storage projects for the commercial and industrial renewable energy market as it recognizes this distributed generation business will continue to present a significant and sustainable growth opportunity over the next five years. In 2017, 30 percent of all new electric-generating capacity brought online in the United States came from solar, second only to new natural gas capacity.

"Being ranked the fourth-largest Solar EPC in the country and the fifth-largest Solar Contractor in California is a great achievement," said David Lincoln, VP Renewable Energy Group. "Being ranked consistently year after year as one of the best in all solar categories is something we are extremely proud of at Rosendin. It is a testament to the commitment and dedication from a phenomenal team within the Rosendin Electric Renewable Energy Group."

About Solar Power World
Solar Power World is the leading online and print resource for news and information regarding solar installation, development and technology. Since 2011, SPW has helped U.S. solar contractors — including installers, developers and EPCs in all markets — grow their businesses and do their jobs better.​

About Rosendin Electric
Rosendin Electric Inc., headquartered in San Jose, Calif., is an employee-owned electrical contractor. With revenues surpassing $2 billion, Rosendin is one of the largest electrical contractors in the United States employing over 6,000 people. For nearly 100 years, Rosendin has created a reputation for building quality electrical and communications installations, building value for clients and building people within the company. For more information, visit www.rosendin.com.

Rosendin Electric, headquartered in San Jose, CA, is the largest employee-owned electrical contractor in the United States. With revenues upwards of $2 billion, Rosendin has 6,000 employees across 15 regional offices nationwide.

Rosendin Named One of the 2019 Best Workplaces in the Bay Area by Great Place to Work® and FORTUNE
Rosendin Electric - Mar 4, 2019