Ronald Schenck's New Book "In Defense of Democracy" is a Simple and Unadorned View About the Current State of the Union, and an Insightful Perspective to Turn It Around. 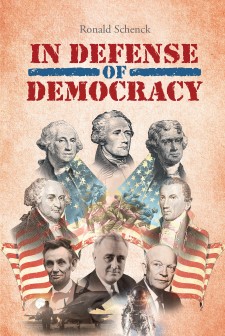 WALLOWA, OR, October 3, 2018 (Newswire.com) - Ronald Schenck, a lawyer, Judge, and proud Korean War veteran, has completed his most recent book “In Defense of Democracy”, a gripping and stark critique of the current state of the United States government, and an excellent compilation of ideas that could help the problems responsible for the slow but eventual down fall of our Democracy.

Published by Fulton Books, Ronald Schenck’s book begs for the formation of a strong third party to stand between the republican and democrat parties. The author asserts that the two party system which now controls the election of the United States governmental representatives is on the brink of forcing the very destruction of democracy!

The author pleads for major amendments to the Constitution – specifically, repeal of the electoral college provision; a major amendment of the free speech provision to nullify the holding in the US Supreme Court “Citizens United” case; repealing the first two paragraphs of Article 1 Section Three (the election of Senators) and providing that Senators be elected from districts with the approximate same population without regard to State boundaries). These changes would solidify the “one citizen – one vote” rule in the election of our government.

The author also feels that the development of a strong mandatory curriculum in our public high schools teaching civics is of the utmost importance. This course should be developed by a panel of University political science Department heads. Furthermore taking and completing such a course should be required to vote in all national elections.

The history of the descent of the United States government into the present two party system is explored by a short examination of each Presidents tenure since World War II, not in depth, but in their major contributions and missteps which aided materially in this descent.

Readers who wish to experience this informative and truly inspired work can purchase “In Defense of Democracy” at bookstores everywhere, or online at the Apple iTunes store, Amazon, Google Play or Barnes and Noble.