Ron Suskind, Pulitzer-Winning Author, to Speak About His Family's Journey in Connecting With Autistic Son 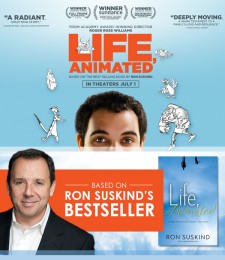 Best-selling author Ron Suskind and his autistic son, Owen, will serve as keynote speakers; they are the subject of this year’s Academy Award-nominated documentary Life, Animated. Together, they will share their astonishing story of how Owen, following a diagnosis of regressive autism at 3 years old, slowly learned language and emotional dynamics by studying animated Disney movies. And how, through a series of startling breakthroughs, the family began to communicate with their lost son in movie dialogue.

“Autism now affects one in every 68 children in the United States[i].  Currently at Marbridge, the autism diagnosis represents 25% of our resident population. We are eager to learn more from Mr. Suskind, and to explore the unknown capacities of the human mind,” states Scott McAvoy, Vice President of Operations at Marbridge. “It is an honor to have Ron speaking at the CoAct Project this year, and to consider the impact this knowledge could have on so many individuals, their families and caregivers.”

This year will serve as the 5th annual symposium of its kind at Marbridge, bringing together leadership, organizations and professionals in the field of intellectual disability, including Autism, Down Syndrome, Williams Syndrome, Cerebral Palsy, seizure disorder and traumatic brain injury. “In our conversations with industry partners, it is apparent that there are a host of topics and concerns we share,” said James Stacey, President of Marbridge. “In 2013, we decided it was time to establish a forum where we could discuss our commonalities and share best practices.  We are committed to this collaboration moving forward, and to enhancing the lives of individuals with special needs.”

Founded in 1953, Marbridge is a non-profit residential community for adults with intellectual disabilities (www.marbridge.org). Located on 170 acres in south Austin, Texas, the campus consists of three interconnected communities providing varying levels of care—from semi-independent care, to assisted living, to skilled nursing and physical rehabilitation services. With over 250 residents, the population represents a diversity of diagnoses, including Autism, Down Syndrome, Williams Syndrome, Cerebral Palsy, seizure disorder and traumatic brain injury.  With the unique Life Options Program, Marbridge provides a distinctly different lifestyle that ensures that each individual has the opportunity to learn, experience and achieve a whole new life at Marbridge.

[i]  In 2016, the Centers for Disease Control's Autism and Developmental Disabilities Monitoring (ADDM) reported that approximately 1 in 68 children in the United States has been identified with an Autism Spectrum Disorder (ASD). This rate remains the same as in 2014, which is the first time it has not risen.

[ii] On March 27, 2014, the Centers for Disease Control and Prevention (CDC) released new data on the prevalence of autism in the United States. This surveillance study identified 1 in 68 children (1 in 42 boys and 1 in 189 girls) as having Autism Spectrum Disorder (ASD).

Marbridge is a non-profit residential community that offers transitional and lifetime care to adults with a wide range of cognitive abilities, providing them with opportunities to learn, experience and achieve a whole new life.