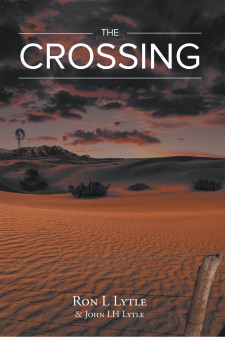 BELEN, N.M., March 17, 2020 (Newswire.com) - ​Ron L, a retired warden for the New Mexico Department of Corrections and John LH Lytle, a life-long resident of New Mexico who has worked as a corrections officer and police officer, have completed their most recent book “The Crossing”:  a gripping and potent narrative that shares the mission of a governor and a former police officer to erase injustice and restore the peace and order in their place where crime has always moved quietly in the shadows.

Ron writes, “The large white man known as Pete told Juan in Spanish to tie the young male reporter’s feet together with his belt so he could hold the struggling female reporter down. Juan did what he was told as he removed his belt and tightly cinched Cal’s feet together and sat him on the ground.

"Pete, cool and calm, pointed the gun at the young man’s head and fired. Ginger screamed in horror as she knew her life would soon be over as well.

"Hundreds of miles north of the rugged, barren desert of southern New Mexico sat the governor in his mansion in Santa Fe. The newly elected governor of New Mexico, Zack Wilson, had a problem. The state’s most highly regarded law enforcement agency was dirty. The governor needed to find the state police officer or officers working with the Mexican cartels before the FBI took action or the media found out.

"The governor turned to an old friend to find the corrupt officers, sending a messenger to contact the former police officer turned recluse, Ignacio Quintana. Quintana, now living in the canyon country of western New Mexico, had grown to like his cows more than people and did his best to stay away from town and his former profession. So when he watched as his daughter rode up the dirt road on her horse with a strange-looking ‘gringo’ from back east, it drew his ire and ended his retirement.”

Published by Fulton Books, Ron L & John LH Lytle’s book is an interesting read through pages that will definitely invite the readers into a thrilling crime novel with an operation to bring back peace and order in the state.

Readers who wish to experience this brilliant work can purchase “The Crossing” at bookstores everywhere, or online at the Apple iTunes Store, Amazon, Google Play or Barnes & Noble.

D. Bhandari's New Book 'A Day With My Babysitter Cindy' Displays the Beautiful Relationship of a Little Child and a Babysitter
Fulton Books - May 22, 2020

D. Bhandari's New Book 'How I Grew Sunflower in My Yard' Tells a Tale of the Simple Yet Fulfilling Joy of Growing Flowers
Fulton Books - May 22, 2020
Newswire