The development of the kits, which has been ongoing for almost a year, has involved expert input from motoring and military history experts in both the U.K. and United States. Specialists including A.J. Glew and The Vintage Garage; the Tank Museum at Bovington; and both The Rolls-Royce Owners Club and Rolls-Royce Enthusiasts clubs provided technical input. The result is a model that is not only highly-accurate but engineered to levels that set a new standard in scale automobiles.

Released 100 years after the Rolls-Royce Armoured Cars made their greatest contribution to World War I, these kits offer builders a link to one of the iconic motor vehicles of the 20th Century – The Rolls-Royce 40/50 HP Silver Ghost.0 In its armoured form, the chassis was used extensively by the British army during the Arab Revolt and is often associated with Col. Thomas Edward Lawrence – Lawrence of Arabia. In addition, they helped cement the reputation of Rolls-Royce as a prestige car manufacturer.

“These are the most detailed kits we have ever made,” said Kian Shroff, Managing Director of Armortek. “So it is fitting that, when we decided to set a new standard, we chose the 40/50 Silver Ghost – the car that set the standard for quality and engineering at the beginning of the last century. In another break with our usual offerings, while we have traditionally offered un-assembled kits for our customers, for the first time we will also offer the engine and chassis as pre-built models to appeal to the collector and automobilia markets.”

“The Rolls-Royce Armoured Car is one of the most recognizable military vehicles of the 20th Century,” said James Stejskal, military historian and author of Masters of Mayhem, an upcoming book that details Lawrence’s armoured car operations. “It also represented one of the early examples of mechanization on the battlefield.  Because of the robustness and quality of the existing Silver Ghost chassis, the British were able to adapt to modern warfare extremely quickly in 1914. The Admiralty Pattern armoured car is an historically important vehicle and worthy of Armortek’s efforts to make this highly-detailed tribute.”

Designed and precision engineered in the UK and made from aluminium, brass and steel, these limited-production kits come with a numbered chassis and a certificate of authenticity.

The price of the Armoured Car kit is £2,950 plus tax and shipping.

Armortek is a family owned business operating from its state of the art factory in Hampshire, UK. Research, design and manufacture of the kits are all done in house.

Armortek has been producing 1/6th scale all metal model kits for over 15 years and, in that time, has produced over 20 different WW1 or WW2 kits for hobbyists, engineers and collectors across the world. Armortek kits are all metal and feature scale thickness armour. As a result, a tank kit can weigh over 100kg (220lbs) resulting in a very realistic motion over rough terrain. Armortek kits can be remote controlled through optional extras which add motion, turret rotation, gun movements and recoil as well as high definition sound and exhaust smoke. 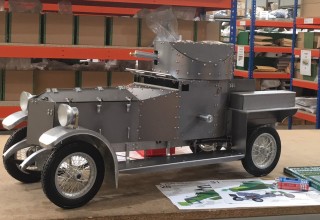 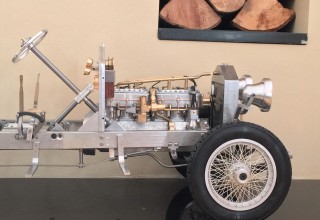 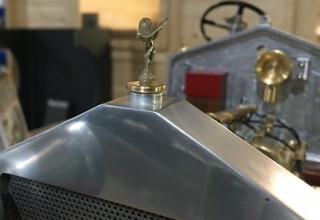 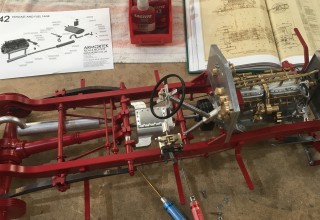