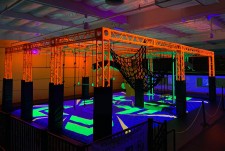 A few years after opening, the Rockin’ Jump Vacaville team decided it was time to upgrade their venue and contacted Best American Trampoline Parks, who manufactured, installed and helped design the trampoline park.

The timing of their request for innovative attractions that would elevate their entertainment center to the next level couldn’t have been better. Best American recently released a new line of neon attractions and materials that illuminate when exposed to black lights.

Rockin’ Jump Vacaville expressed their excitement about the new ninja course and indicated that the addition of the glow-in-the-dark elements and attractions has resulted in a positive response from guests of all ages who are thrilled about the park's update.

“There is a lot of excitement surrounding the addition of our ninja course. Guests of all ages are really looking forward to challenging themselves on the new ninja course. The feedback and responses we’ve received about the new attraction have been great for our marketing and social media. The fact that it glows in the dark adds a whole other level of excitement and intrigue,” Todd Carlson, co-owner of Rockin’ Jump Vacaville, stated.

Additional information on Rockin’ Jump Vacaville and themed events, including neon nights, can be found on their website.

Anyone interested in learning more about the Best American Trampoline Parks Neon Collection is encouraged to email info@trampolinepark.com.