Robert Steinberg's New Book "Jake the Horse Thief: A Story of the Jews Who Were Left Behind" is a Tale of a Young Jew Risking His Life to Save His Kin, and His Religion. 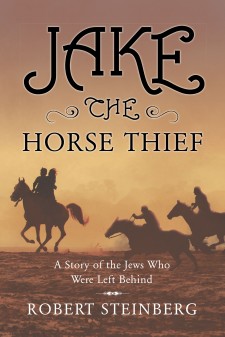 New York, NY, April 5, 2017 (Newswire.com) - Robert Steinberg, a gifted author inspired by his maternal grandparents, has completed his most recent book “Jake The Horse Thief: A Story of the Jews Who Were Left Behind”:  a gripping and tender story of a young man who gives everything to keep his fellow countryman safe in the coming terror that is the Nazi Regime.

Robert was 6 months into writing his novel when he realized he was inspired by his grandparents.  He says, “It was my grandparents’ good fortune to leave Lithuania before Nazi Germany overran Mid-Europe. His grandfather could have been (should have been?) just like Jake.”

Published by Fulton Books, Robert Steinberg’s book introduces Jake and his sister Leah, who were torn apart from their good life in their youth. Jake lived well enough with the town rabbi in Pinsk but Leah suffered at the hands of the butcher and especially at the hands of the butcher’s humiliating wife, Dora. Leah was treated as the lowest servant and so they made a daring escape on horseback.

As the Nazi steamroller advanced through Eastern Europe, Jake The Horse Thief would be faced with the dangers of World War II. Jake became a leader of the partisan group dedicated to saving the lives of elderly Jews who were left behind in Vilna and Kovna Caberna.

Jake was aiding escapees to leave Europe by water but the Nazis had a shore battery to shoot down allied planes and naval vessels along that Baltic coast, making it a dangerous business, indeed.

In the meantime, Jake could not forget the dread that he had of a family in Pinsk that were dedicated to his eradication.

Readers who wish to experience this gripping work can purchase “Jake The Horse Thief: A Story of the Jews Who Were Left Behind” at bookstores everywhere, or online at the Apple iTunes store, Amazon, Google Play or Barnes and Noble.

Tags: Fulton Books, Jake The Horse Thief: A Story of the Jews Who Were Left Behind, New Books, Robert Steinberg

L. C. Bryant's New Book 'Beyond the Fighter' is a Profound Inspiration in Conquering Battles Against Illness and Embracing Vitality
Fulton Books - Jul 7, 2020