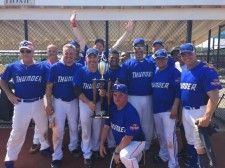 Robert Nelms assumed the role of Recruiting Coordinator for the NJ Thunder Baseball Team, and he’s been fortunate enough to see his team take home the Myrtle Beach Classic Championship for the third year in a row. Not only has the team consistently performed well, but it’s obvious that Nelms’ choices of players for the team have been good moves. In fact, it’s never been more apparent than during their most recent on-field clash with Coastal Carolina Crush in their Beach Battle Classic earlier this month.

An incredible spectacle, it seemed as though the Thunder had the game in the bag from the word go. In fact — after managing to get on the board first — they went on to build a 6-1 lead over Crush. However, the tide would suddenly turn, and the challengers managed to pull back four more runs. With the Thunder leading by just one run at 6-5, a nail-biting finale ensued with every fan and spectator on the edge of their seat.

Despite the Crush’s late rally and obvious determination though — and in circumstances which have, many times in the course of history, seen the leaders blow their lead — Team Thunder eventually sealed the deal and won the game. It would have been tragic for the Thunder to lose, especially given their exceptionally good performance at the start of the campaign against such formidable teams as the Nationals, Rail Riders and Braves.

In fact, one could hardly blame them for ostensibly becoming complacent during the final once they’d built such a strong lead; however, it was Nelms who managed to pull his team together when it looked like all would be lost.

And it was only at the bottom of the ninth, when Jeremy Brownlee (who, not coincidentally, had been the team leader for stolen bases during the tournament) managed to strike out the last batter allowing team Thunder its 3rd Championship in as many years. Nelms himself provided key hits during the game, along with Kenny Kraddock assisting and Frank Barka providing a few tremendous power shots which went to deep centerfield.

The veteran recruiter, though, can cite his comprehensive background when asked about how he manages to maintain his cool as a player and coach in such uncertain times. Thunder manager, Joe Rosado has called Nelms “one of the most talented coaches that I have been around in 22 years of coaching baseball,” while also adding that he considers him to be “ridiculously intelligent” and knowledgeable “in all areas of pitching.”

This is probably partly due to the fact that Nelms managed to accrue exceptional knowledge during his time as a pitcher for various minor league and semi-pro teams. His colleagues say that he is able to lend wisdom to all players in the squad, not just the pitchers, while he’s also been involved in mentoring one of the nation’s top pitching staffs over the last half decade.

Nelms joined the Thunder in 2012 following two years as the pitching coach for the Rangers. Since then, the team has managed to maintain an impressive 2.64 ERA, with their 2014 and 2015 scores ending at 2.22 and 2.45 respectively (earning them Roy Hobbs World Series Championships.) At the end of the 15/16 campaign, Thunder suffered an unexpected blow when their three starting pitchers decided to leave the team along with their all-time saves leader.

Nelms remains un-phased, though. With quality pitchers such as Billy Vitolo, Ricky Fernandez, Mario Lopez, and MVP Brownlee, the team has demonstrated that they can band together in the face of any adversity, whether that be the prospect of losing a significant lead or knowing that much-beloved and valued members of the squad won’t be joining them again in the near-future.

And it’s obvious that he’s got no intentions of going anywhere else, either. “My family and I are thankful for the faith that Coach Rosado and Coach Jones have put in us,” said Nelms; and it’s obvious that, with a track record like the one he continues to maintain, neither man is going to change their position on the veteran recruiter.

The Thunder now has everything to look forward to in the coming season, they are headed to the Liberty Bell Classic, and we can’t wait to see their journey continue as they strive to maintain their reputation as one of the most competent teams in the league.