As owner of Rophe Pharma, Gadimian is passionate about educating people on the fantastic benefits of fish oil. He understands the complicated science of why fish oil is good for you but he can also break it down into a way normal people talk and heal. 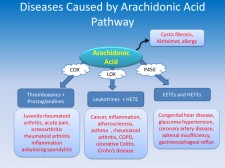 What we understand as inflammation, scientists describe this complex process as “stopping the arachidonic acid cascade.” And yup, fish oil does that.

Our bodies don’t create the essential oils omega-3 and omega-6, so we get it from our diet. Meat and vegetable oil are the most common dietary sources of omega-6. Omega-3 acids are mainly found in seafood and fish oil. A ‘good acid’ would be the fish-sourced omega-3 fatty acids known as eicosapentaenoic acid (EPA) and docosahexaenoic acid (DHA).

The omega-6 fatty acids can convert to arachidonic acid which is a “bad” fat.  Arachidonic acids are found primarily in fatty red meats, egg yolks, and organ meats. This polyunsaturated fat is thought to be the most dangerous fat when consumed in excess.

It is important to block bad fat effects

Examples of eicosanoids are prostaglandins, prostacyclins, thromboxanes, leukotrienes, and epoxyeicosatrienoic acids (ETEs). They have roles in inflammation, fever, regulation of blood pressure, blood clotting, immune system modulation, control of reproductive processes and tissue growth, and regulation of the sleep/wake cycle and may play a role in cancer, asthma, inflammatory bowel disease, rheumatoid arthritis, and other autoimmune disorders. (Figure 1).

The clinically effective dose of DHA and EPA is around 1-2 grams per day.

Figure 1: Illustration of the three pathways in the classical arachidonic acid cascade and the related diseases in each pathway.

California Web Solutions is a leader on Online Marketing and Search Engine Optimisations since 2006.

Nutty for Brazil Nuts? You Should Be!
Robert Gadimian summarizes research literature about "​​​Selenium is the healthy secret in Brazil Nuts ..."
CWS - Nov 29, 2017