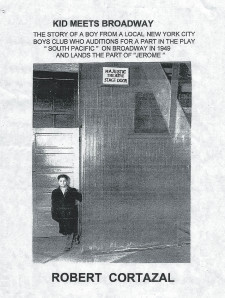 JERSEY CITY, N.J., May 7, 2021 (Newswire.com) - Robert Cortazal, a Broadway actor for five years and a widower living in New Jersey, has completed his most recent book "Kid Meets Broadway": an influential piece that recounts the key moments in the life of Robert Cortazal which shaped him to be the person that he is now. He shared in this memoir his Broadway journey as part of famous plays such as "South Pacific" and "The King and I".

Robert writes, "Kid Meets Broadway is about a young boy of eleven years old that falls into a famous play in 1949, then soon goes onto another play. The plays were on Broadway: South Pacific in 1949 and The King and I in 1951. This memoir has original onstage photos included within and an autographed photo signed to Robert by Yul Brynner dressed as the king."

Published by Fulton Books, Robert Cortazal's book is a motivating story of a young boy from Boys School in New York and his glory days spent on Broadway with unforgettable people.

The story sets forth in 1943, Cortazal takes his readers as he reminisces the magic and memories engraved inside and behind the red curtain.

Readers who wish to experience this compelling work can purchase "Kid Meets Broadway" at bookstores everywhere, or online at the Apple iTunes Store, Amazon, Google Play or Barnes & Noble.