Rob Luna Announces the Release of His Debut Album

Hip-Hop music has always been a part of his life and he gives back by paying homage to the past, present and future. But you won't find any lyrics on this album, hence, without words. 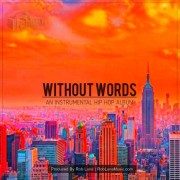 New York City, NY, March 19, 2016 (Newswire.com) - ​​​​​​​​​​​​​​​​​​​​​​​​​​​​​​​​​​​​​​​Rob Luna, one of the newest producers in the music industry, unveils cover art and announces plans to release his upcoming debut album "Without Words". The album will feature 12 instrumental hip-hop tracks and each track tells a story, covering a broad range of feelings and emotions. Rob said, "This will be something totally different for me, as I am so used to only making music for other artists", and he added, "I just want the world to hear my music".

This saavy, self-taught producer has collaborated with hundreds of independent artists from all over the world (and in many cases has even produced for free with the ones struggling financially).  "I see the potential in them and I just want to be a part of helping them make good music", Rob stated.

"You already know what it is...it's the Peoples Choice...DJ Envy. Shout out to the homie Rob Luna...I see you on them beats! Rob I need some beats for my album!"

Meanwhile, much of Rob's work can be heard on his Soundcloud page, where his beats have received over 1.5 Million streaming plays since 2014 and has steadily gained a following of over 7,500 fans.  Rob's social media popularity has also grown over the last couple of years. His Facebook, Twitter and Instagram accounts have collectively gained him an additional 10,000+ followers.

His work has been featured on several “Got Instrumentals” releases alongside some of today's hottest producers, such as Mike WiLL Made It, Vybe, Lex Luger and DJ Mustard.

Back in 2012, he launched a hip-hop mixtape series called "Full Breach Mixtapes", which features many of his collaborations with independent rappers and singers.  To date, he has released 5 mixtapes, the most recent one called "Full Breach: Volume 5", was hosted by DJ Envy from Power 105.1 FM.

Rob also operates a music website called "RobLunaMusic.com", where artists can lease or purchase his instrumental beats, take them to any recording studio, lay down some vocals and make a song. Rob said, “I am not about using my craft as a means for fame or fortune,  but rather as a way to grow and maintain my passion to create music that inspires others“.  The website also offers other resources for artists as well as advice and music industry articles.

"Without Words" is expected to be released on Apple Music and Spotify in the first half of 2016. #WithoutWords #RobLunaMusic