Ride Along on 'Arm Chair' Patrol With Officer John Borkovich as He Outsmarts Poachers and Land Abusers in His New Book, 'Wildlife 911: On Patrol' 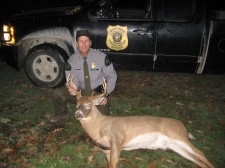 Port Huron, Mich., June 27, 2017 (Newswire.com) - Encounters with bizarre religious cults, dastardly burglars, illegal immigrants and much more are told in Michigan Conservation Officer John Borkovich's new book, "Wildlife 911: On Patrol" — out now on Amazon. Ride along on "armchair" patrol with Officer Borkovich as he outsmarts deer poachers, thwarts fish thieves, and foils outlaws and felons, all while putting his life in danger as he protects Michigan's natural resources. John's collection of true stories is action-packed, suspenseful, and often humorous.

The love and admiration of nature are what drew Officer Borkovich into the profession. As John became more and more interested in the natural resources around him, he realized that he wanted and needed to dedicate himself not only to enjoying and respecting our wildlife, but also to protecting our fish, game, and natural resources. “My mission is to be part of the Conservationist Movement to protect and preserve natural resources for future generations so that they can experience and love nature like I do,” said Borkovich. His love of nature has led him to a long and successful career against poaching, land abuse, litter and pollution. He has even experienced dangerous (and often amusing) encounters featuring gun and knife fights.

John was part of the DNR Firearms Transition Team and was also a firearms instructor. He was a Field Training Officer for recruit conservation officers and was an instructor at the Conservation Officer Police Academy held at the Michigan State Police headquarters in Lansing. John received many safe driving awards and received recognition for his "Fit for Duty" performances.

John was an adjunct professor at St. Clair County Community College in the criminal justice department. He developed the curriculum for two separate courses at the college and taught the Conservation Law Enforcement and Environmental Law Enforcement classes.