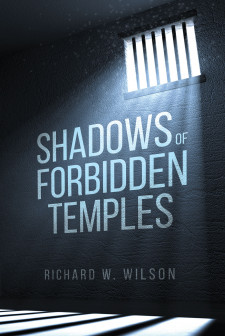 SKILLMAN, N.J., May 14, 2021 (Newswire.com) - Richard W. Wilson, a naval officer retired from reserve intelligence, has completed his most recent book "Shadows of Forbidden Temples":  a revealing account of lives that are mired in deep and unsavory cesspools of greed, cruelty, and lust.

Richard writes, "Tim, a teacher from a small village by the Delaware River, was drawn into an unsavory vortex of greed that included a lawyer, the mayor of his town, and a mafia hoodlum. It began with Tim's discovery of a journal written by a young girl who, in 1844, traveled alone by ship from Australia to Hong Kong. He came across the journal after discovering the body of an antique dealer in a thicket by the river. How could he know that he and the dealer were related, that both were descended from the girl who had traveled alone to Hong Kong? By what strange twist of fate would he find himself the beneficiary of a fortune?

To his surprise, Tim discovered other beneficiaries who had been considered and discarded. One was his deceased father, who, following WWII, met and fell in love with a Japanese woman. She was Tim's mother. Another was Nelle, who left England for Australia to work as a surgeon. There, she had a love affair that ended with murder. Later, Nelle emigrated to Nebraska, married, and had a child. It was an unhappy family for her daughter, Kaitlin, fled home to escape her domineering father. The fates were unkind, for she became involved with a psychopath who, on a cold night, lured a young Mexican man into the countryside, whipped him, and left him naked tied to a fence post.

The demon of greed for fame, money, sex, and power crept into these people's lives. In its wake was wreckage, but for Tim, it was the start of an odyssey that led to a new beginning."

Published by Fulton Books, Richard W. Wilson's book is an intense and stirring journey that exposes the power of greed and how it poisons the lives of people. The book teaches readers not to submit to selfish desire but instead to listen to the promptings of their conscience.

Readers who wish to experience this riveting work can purchase "Shadows of Forbidden Temples" at bookstores everywhere, or online at the Apple iTunes store, Amazon, Google Play or Barnes & Noble.

Carole Wilson's New Book, 'I'm Just Saying ... I'm Not Just Getting Older, I'm Getting Bolder', Is a Meaningful Journal of a Writer's Thoughts and Moments in Her Life
Fulton Books - Jun 24, 2021