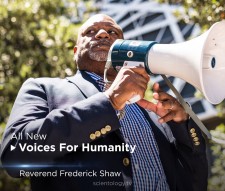 LOS ANGELES, October 25, 2018 (Newswire.com) - In a new documentary in “The Voices for Humanity” series on the Scientology TV network, human rights advocate Rev. Frederick Shaw, Jr. takes on the multi-billion dollar psychiatric interests in drugging and electroshocking children, especially in his African American community. Rev. Shaw features in the documentary that started airing on October 24. Click here to watch. As the international spokesperson for the Citizens Commission on Human Rights International (CCHR) and a Vice President of the Inglewood-South Bay branch of the NAACP (National Association for the Advancement of Colored People), Rev. Shaw championed the national NAACP’s unanimous passage of two resolutions opposing electroshock treatment and psychotropic drugging of children.

“Psychiatry has never been a friend of African Americans,” Shaw states. And today, he adds, that enmity is shown in the alarming rate of African American children placed in foster care or in the juvenile justice system where they are labeled with a mental disorder as a pretext to be given psychotropic drugs.

Shaw is a powerful voice steeped in firsthand experience: A native of Compton, California, and a former Los Angeles County Sheriff's Deputy, he co-founded an organization contracted to serve at-risk youth from ages 12–18 years old. He found there was an over-representation of African American children in foster care and the juvenile justice system. Here they were targets for mind-altering drugs which he refused to give adolescents in his care. The Los Angeles County Board of Supervisors awarded him for his work with foster care children and youth on probation.[1]

Through his work with CCHR, he also became aware that electroshock treatment—the psychiatric practice of sending up to 460 volts of electricity through the brain to treat depressed moods, while knowing that this cannot cure—spurred him to lead a nationwide campaign to raise awareness of the brain-damaging effects of the treatment and call for an end to the abuse. Last year, as a Vice President of the Inglewood-South Bay branch of the NAACP, Shaw helped obtain a national NAACP resolution supporting a ban on ECT for children, adolescents and young adults.

He also helped achieve a similar resolution to protect foster care and other children from psychotropic drugs. As Shaw points out, African-American children are placed in foster care at twice the rate of white children and are more likely to remain in foster care longer and less likely to be returned home.[2] By the time they reach the age of 18, 53 percent of black children in the U.S. experience a child protective services investigation compared to 37 percent of children in general.[3]

The unanimously passed national NAACP resolution calls for legislative protections for foster children, stating: “Foster children are being given cocktails of powerful psychotropic drugs and federal inspectors found more than half the children nationwide are poorly monitored.”[4] According to studies and drug regulatory agency warnings, these drugs have adverse effects, including stroke, pancreatitis, obesity, and diabetes.[5] A variety of drugs targeted towards the central nervous system are associated with cardiac side effects, including arrhythmia and sudden death.[6]

Rev. Shaw regularly tours community leaders and groups through CCHR International’s “Psychiatry: An Industry of Death” museum that details the history of psychiatry’s abuses, including racism dating back to the “Father of American psychiatry,” Benjamin Rush, who declared in the late 1700s that African Americans were “diseased.”

“Today, African Americans are over-represented in foster care, the juvenile justice system, prison and the homeless, where they are candidates for psychiatric oppression—drugs—and other abuse,” Shaw states. “Therefore, I feel privileged that the Scientology Network chose my work for its Voice for Humanity series because it will further raise very necessary awareness about the abuses and racism that occurs in the mental health field to help put an end to these. It provides a voice to a wider community—those that may be silenced by drugs and electroshock or who are being forced onto brain-damaging ‘treatment’ simply because they are Black or a minority,” Shaw says.

CCHR Florida’s president, Diane Stein, also features in the Voices for Humanity series for her work in exposing the involuntary commitment and drugging of children and others. You can watch it here.

CCHR is a mental health industry watchdog organization that works for patient protections and encourages the public to take action against psychiatric abuse. As a nonprofit, CCHR relies on memberships and donations to carry out its important work. Click here to Support the Cause.