The enduring disagreement between all three Faiths of Abraham is the identity of the long expected Messiah. While Christianity has long asserted someone named Jesus will return, Judaism has wisely avoided such arrogance, and now comes proof why. 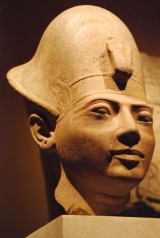 Portland, Oregon, July 18, 2014 (Newswire.com) - In all such discussions, it must be remembered first and foremost that the messianic expectation, as it exists in the Faiths of Abraham, comes from the assertions of the Hebrew prophets throughout the millennia. The first of those was AmenMoses himself and it must always be remembered that he was Egyptian and thereby expert in their symbology and symbolized wisdom. This same expertise also characterized those who followed in his footsteps and all the symbolic Hebrew prophecies and wisdom texts are based on the same special word-based variant of Egyptian symbology.

Though providing a lot of symbolized details throughout the millennia via a continuing stream of symbolic and prophetic narratives, no literal names were ever asserted by the Hebrew prophets. This is one of the great fallacies of Christianity as the world will now see. Two of the symbols used in the Hebrew texts, including the Book of Revelation have been the lion and lamb. The dualism seen in the lion and lamb symbolism has long been associated with the Messiah (lion of the tribe of Judah, etc.), long before the stories of Jesus were created. As part of the Roman effort to co-opt the Hebrew prophets, prophecies, and key symbolism, the lamb and the lion were both deceptively associated with a character named Jesus.

In this age of science and inquiry, it is beyond obvious that long dead bodies don't rise from the dead. On the other hand, all of the ancient and modern esoteric wisdom groups, all the eastern religions, and even the ancient Hebrew groups and modern Jewish leaders accept the reality of reincarnation, hence the continuation of the soul and the reality of our existence across multiple lifetimes.

To truly understand the source and meaning of the lion and lamb symbolism, one must look back to ancient Egypt and to AmenMoses. As discussed in earlier articles and books, all the evidence proves that the "one true god" of Moses was Amen (Amun) and the presence of the mysterious intonement Amen throughout the Bible is solid evidence of this. Furthermore, Moses has been definitively located in Egyptian history and they have been calling him AmenMesse. The Temple of Amen (Amun) at Karnak, in Thebes, has a huge demonstration of the true source and meaning of the Lion and Lamb symbolism, using the long avenue of sphinxes, each with the body of a lion and the head of ram, which is a male sheep.

As described in chapter eight of Finishing the Mysteries of Gods and Symbols, these compound symbols are actually zodiac based time codes signifying specific 2160-year ages on the zodiac.  The age of the Lion was circa 11-13,000 years ago, which is also the final age of the period the Ancient Egyptians referred to as Zep Tepi , aka The First Times. They and others also called it a golden age, in part because of the symbolic links between the sun, the Lion (aka Leo), and the symbolism of both gold and golden. This was also both the peak and end of a period of advanced human civilization that was destroyed during the rapid ending of the last ice age. The numerous great flood stories, including that of the mythical Atlantis, all allude to this great ancient calamity. That long ago "golden age" ended in utter destruction because of arrogance and greed and because they failed to heed wisdom. Their arrogance led to rapid climate change, just as this cycle is slated to do if humanity fails to listen to the wisdom sent to our time by the ancient sages of that long-ago ill-fated cycle of advanced civilization.

The Lion and Sheep/Ram symbolism at the Temple of Amun was constructed during the age of the Ram (aka Aries) and is a purposeful zodiac-based time-stamp stretching from the age of the Lion to the age of the Ram. Back when it was intact, walking down the long avenue of lion-bodied and ram-headed sphinxes was meant to be symbolic of the long stretch of time that the wisdom and "mystery school" associated with Amun had been in existence. This huge symbolic display was making it abundantly clear they were continuing both a tradition and a long term symbolic plan, which was initiated during Zep Tepi, aka the age of the Lion.

The Ram was also used as a symbol of Amun during this same time period, in much the same way that Hathor (symbolic cow goddess) arose during the age of the Bull (Taurus) and the fish (Pisces) has been used as the symbol of Christianity, which arose early in the age of Pisces. Thereby, a vital purpose of this symbolism is to state that the wisdom, philosophy, and symbology they used flowed from the age of the Lion, hence from the sages during that long-ago and ultimately doomed Zep Tepi. This is important for various reasons, especially considering the statements in the Hebrew prophecies about the "ancient of days" and other symbolic allusions to the zodiac and the great age of the wisdom that has been passed along. As numerous others have now determined, and as discussed in Finishing the Mysteries of Gods and Symbols, the pyramids of Giza and the Great Sphinx are much older than long claimed by most Egyptologists and have likewise been dated to that same period called Zep Tepi, aka the age of the Lion.

The Lion and Ram symbolism represents the span of time from the age of the Lion to that of the Ram. Also, the Ram (a male dual-horned sheep) is most closely linked with the symbolism associated with Amen. Furthermore, the now verified time of AmenMoses (AmenMesse) was during the age of the Ram. Since the time of the Exodus, the symbolism of lambs (sacrificial and otherwise) have been central to the Hebrew symbolic tradition, prophecies, and related wisdom. Just like most of the other symbolism from Genesis and Exodus, it has been buried under the long term errors of religion.

Firstly, Hebrew religious leaders failed to understand most of the Egyptian sourced symbolism. The rules and keys to the symbology were purposely kept hidden from them by AmenMoses and protected by the secretive wisdom groups established by him and kept alive and informed by subsequent prophets. It is also relevant to remember here that Amen (Amun) also means hidden or the hidden one. The wisdom associated with Amen is indeed hidden within the symbology, which is also what AmenMoses and subsequent prophets did with the narratives they authored. This is symbolized by the story of smashing of the two tables of stone into many pieces (many symbols) and then hiding them within an ark.

Secondly, early religious leaders were fully aware that AmenMoses completely distrusted them and had left hidden wisdom and instructions for a secretive brotherhood that has always remained separate from the priests and their erroneous religious assertions. Some of these religious leaders sought to obscure that reality by modifying and/or reinterpreting troubling  details so they favored religion and religious leaders, instead of chastising them as had AmenMoses and the other prophets. Stories like those of Noah, Moses, Joseph, Jacob, and others were heavily and purposely symbolic to encode layers of advanced wisdom and protect vital details, for those in their far future.

Now consider again the symbolism of the lamb, which is also a newborn sheep or ram. AmenMoses' name and title means son of or born of Amen, in other words he was the symbolic son of the symbolized god Amen, just as the later Sons of Light title was symbolic and not literal. Since Moses' time was during the age of the Ram, and Amen is often symbolized as a ram (often with a lion's body), the Ram's (Amen) symbolic "son" (Moses) would thereby be symbolized as a lamb. We've also seen Christianity's long term use of bodily resurrection in association with the return of their fantasy messiah.

In this age of science and inquiry, it is beyond obvious that long dead bodies don't rise from the dead. On the other hand, all of the ancient and modern esoteric wisdom groups, all the eastern religions, and even the ancient Hebrew groups and modern Jewish leaders accept the reality of reincarnation, hence the continuation of the soul and the reality of our existence across multiple lifetimes. The founders of Roman Christianity went to great lengths to bury this wisdom and have instead pushed a complex and deceptive fantasy about returning dead bodies. These stories have been used to dupe the so-called faithful and hide the truth about reincarnation, about the future messiah expected by the Essenes, related Hebrew wisdom groups, and even the Gnostics.

So putting this all together, we see Christian Rome going to extreme lengths across two millennia to misdirect from the truth about reincarnation, the identity of the future Hebrew Messiah, and the symbolism of the lamb and lion. When we look to Egypt we see the truth about the source and great age of the Lion and Ram/Sheep/Lamb symbolism which came from the ancient wisdom and symbology associated with Amen, and not with the so-called God of Abraham or "Jesus." Furthermore, when you look behind the fog caused by Christian assertions about bodily resurrection of a long dead fantasy messiah, you can see that its founders and leaders have long feared the truth about reincarnation, but most especially the reincarnation of the Hebrew Messiah.

Next, we see how Christianity has gone to great lengths to hide the truth about the lamb symbolism, which actually refers to the "Son of Amen," hence to AmenMoses. So the truth about the return of the Messiah that Rome has struggled to hide all of this time is that the Essenes and the wisdom groups before and after them were expecting the reincarnation of AmenMoses, not the bodily resurrection of someone named "Jesus."  In this lifetime, the author of Finishing the Mysteries of Gods and Symbols, is the reincarnated AmenMoses, Elijah, and all the true Hebrew prophets. Thanks to him, the world now has a mountain of proof and the wisdom required to end this long age of darkness by opening the eyes of the blind so they can finally see the light, precisely as long-ago predicted.

To truly understand the supporting evidence and rules for the symbology, reading Finishing the Mysteries of Gods and Symbols, by Seven Star Hand is an absolute requirement.

The head in sand pose may temporarily hide danger from the ostrich, but the hungry lion has no misconceptions about the truly dire nature of that bird's predicament.

Ancient Symbology Illuminates Why Comet PanStarrs in Pisces Terrifies Vatican
The sudden exit of Pope Benedict, the rapid selection of Francis, and all the resulting hoopla were designed to hide growing signs the Vatican knows the prophecies of their demise are quickly coming true, and all efforts to prevent it are failing.
SevenStarHand.org - Mar 16, 2013
Talpiot Tombs Encode Stunning Proof New Testament Is a Roman Deception
History records how groups like the Essenes, Gnostics, Ebionites, Cathars, Templars and others were ruthlessly eliminated by Rome, and their knowledge destroyed, because they possessed some evidence that contradicted the Bible or Christian dogma.
SevenStarHand.org - Apr 26, 2012
Jesus Discovery Team Accidentally Uncovers Christianity's Oldest and Darkest Secret
While struggling to hide the true meaning of the recent Talpiot Tomb findings, the Jesus Discovery team blunders into a trap set by the Hebrew author of the Book of Revelation, exposing Christian Rome's darkest secret to the bright light.
SevenStarHand.org - Apr 11, 2012