Restaurant Magic announced today that it has promoted Michael Beck to Vice President of Sales & Marketing. Prior to this promotion, Mr. Beck was Restaurant Magic's Director of Sales. 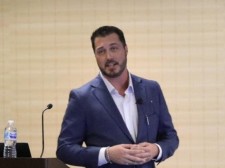 Tampa, FL, May 14, 2019 (Newswire.com) - Restaurant Magic announced today that it has promoted Michael Beck to Vice President of Sales & Marketing.  Prior to this promotion, Mr. Beck was Restaurant Magic’s Director of Sales.   In his new role, Mr. Beck will work to grow, train, and manage Restaurant Magic’s national sales team.  He will also direct the organizations brand and marketing strategy, allowing the company to increase awareness and extend market penetration.

Mr. Beck is well known for his upbeat and energetic style.  His enthusiasm and positivity make people feel immediately comfortable.  He possesses the ability to draw people into his ideas and get them committed to executing on initiatives in which he is involved.   Mr. Beck believes in servant leadership and is committed to providing his clients and his team with anything he can to make them successful.

Mr. Beck has over 20 years of hospitality operations, sales, and leadership experience.  Prior to joining Restaurant Magic, he had sales and leadership positions at Xpient and Altametrics.  Mr. Beck graduated from University of Maryland with a bachelor’s degree in communications, holds an associate’s degree in culinary arts from Western Culinary Institute.  He is a military veteran having proudly served in the United States Army.

“Michael has continued to grow and embrace new challenges in the five years he’s been on our team,” said Drew Peloubet, CEO of Restaurant Magic.  “He’s dedicated to helping our customers succeed, and I’m excited to promote someone into this important role who shares our values.”

Restaurant Magic was founded over 20 years ago with a single vision of providing restaurant operators better access to their operational data.  With this access, operators can make faster decisions, optimize schedules, implement predictive ordering, and create a positive impact on their bottom line.   Restaurant Magic provides insight to some of the largest multi-unit brands in the world, including Dairy Queen, First Watch, Smoothie King and MOD Pizza.  If you are interested in finding out more about Restaurant Magic or scheduling a demo of our software visit www.RestaurantMagic.com or call 1-800-933-4711.

National Center for Performance Health Client Selected as NCAA Athletic Director of the Year
National Center for Performance Health announced today that its client Michael Cerino, Limestone College Vice President for Intercollegiate Athletics, has been recognized as the Under Armour NCAA Division II Athletics Director of the Year by the National Association of Collegiate Directors of Athletics (NACDA).
Stonehill PR - Jun 13, 2019
Design Thinking Consulting Firm Selected as Semi-Finalist for Small Business of the Year
Stonehill announced today that it has been selected as a semi-finalist for the Greater Tampa Chamber of Commerce Small Business of the Year. This is the 39th year for the presentation of the award with past winners including Outback Steakhouse, Fintech, and the Bank of Tampa.
Stonehill PR - Jun 3, 2019
Strategy and Design Thinking Consultant Honored as Entrepreneur of the Year
Stonehill CEO, Douglass Pace, was named Entrepreneur of the Year - Business Services by the 17th Annual American Business Awards®. The American Business Awards are the USA's premier business awards program.
Stonehill PR - May 2, 2019