Respect Is the Key to Unity, Religious Leaders Say

An interfaith conference at the Church of Scientology Sacramento stressed the importance of understanding the beliefs of others. 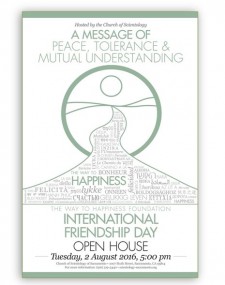 Sacramento, California, August 5, 2016 (Newswire.com) - The Church of Scientology of Sacramento brought together a cross-section of faith groups to discuss peace, tolerance and unity on International Friendship Day.

Opening the conference, Mike Klagenburg, President of the Church of Scientology Sacramento, spoke of his inspiration for hosting the program—the nonreligious moral code written by author and humanitarian L. Ron Hubbard—The Way To Happiness.  The booklet features 21 common-sense precepts—tools for happier living.

In fact it was the chapter titled “Respect the Religious Beliefs of Others” that prompted the church to emphasize religious diversity in the Happiness Day planning.

The Church invited religious leaders from many faiths including the three guest speakers, representing the Church of Jesus Christ of Latter-day Saints, Christian Fellowship Church and  the religion of Islam. Each of these faith leaders spoke on the theme of “friendship.”

Rev. Alice Baber Banks of the Christian Fellowship Ministry emphasized respect and belief. She defined these terms, described how these two qualities encourage trust, and shared verses from the Bible that emphasize love and respect for one another.

Imam Haazim Rashed of the local Masjid As-Sabur Mosque spoke of how Muslims practice their faith with observance of certain practices and daily prayer. In demonstration that peace is a universal spiritual goal, he quoted the Dalai Lama: “We can never obtain peace in the outer world until we make peace with ourselves.”

President of the Interfaith Council of Greater Sacramento Jon Fish shared life lessons from the Mormon faith, broadening attendees’ understanding of his faith through inspirational quotes of the religion’s founder.

Closing the event, two Scientology ministers read from the written works of Scientology Founder L. Ron Hubbard and closed with the Scientology Prayer for Total Freedom.

The Church of Scientology and its members are proud to share the tools for happier living contained in The Way to Happiness with all who seek a better world.