Internationally renowned search and rescue team Los ​Topos marks the anniversary of the 1985 Mexico earthquake with an evacuation drill at city center at the National Scientology Organization, part of the disaster preparedness exercises organized by the city government. 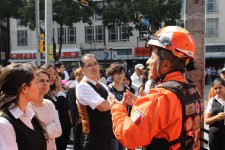 Mexico City, Mexico, September 21, 2016 (Newswire.com) - As part of a city-wide earthquake response drill planned by the Mexico City government, the National Scientology Organization of Mexico organized a successful evacuation exercise, under the supervision of the world-famous search and rescue team, Los Topos. The disaster  preparedness exercise marked the 31st anniversary of the 8.1 magnitude earthquake that devastated the city September 19, 1985.

In their distinctive orange uniforms, Los Topos stationed themselves on each of the 6 floors of the Scientology Church, directly across from Plaza de la Solidaridad. Year after year the Mexico City government holds a ceremony in the square, commemorating the 85 earthquake that killed 10,000, destroyed 30,000 buildings and seriously damaged 100,000 more.

As the city sounded the seismic alarm at 11 a.m. announcing the drill, the Church carried out an orderly evacuation of everyone in the building, bringing them quickly and safely to the street.

Spokesman for the Church of Scientology for Latin America, Rev. Jonathan Marduk Rico, said he was happy with the result. “It is wonderful to work with Los Topos—true professionals in their field. We are proud to have them as our friends.”

Los Topos Founder Héctor Méndez began his career in search and rescue 31 years ago, when the massive earthquake struck his city. Digging through the rubble for survivors, he found and rescued four people who would otherwise have died. Not long after, he founded Los Topos Aztecas, now known simply as Los Topos. Their name means “the moles” and they became known by this nickname because of their skill and courage, digging under collapsed buildings in their search and rescue operations.

Today Los Topos is one of the world’s most trusted search and rescue teams. They responded to Ground Zero in 2001, Indonesia after the deadly 2004 tsunami, Haiti after the earthquake of 2010 and dozens of other crisis sites in more than 20 countries. Los Topos and the Scientology Volunteer Ministers formed a partnership after working together in Haiti.