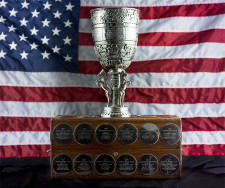 WEST PALM BEACH, Fla., March 28, 2022 (Newswire.com) - Celebrating an especially momentous and historical year, the United States Polo Association (USPA) hosted the U.S. Open Polo Championship® draw party on Wednesday, March 23, at the International Polo Club Palm Beach (IPC) in Wellington, Florida. Held at the IPC Pavilion ahead of the USPA Gold Cup® Semifinals, the final draw of the season featured live music as well as food and drinks for the teams in attendance. USPA Chairman and GAUNTLET OF POLO® competitor, Stewart Armstrong, welcomed the teams and spoke on the astounding participation in this year's U.S. Open Polo Championship®. The U.S. Open Polo Championship® draw was conducted by Haley Bryan, IPC Polo Coordinator, and determined the playing order for the final tournament of the GAUNTLET, which begins Tuesday, March 29, at IPC. All games will be livestreamed exclusively on Global Polo TV.

Defending champion Scone will face an additional seven teams in their fight to reclaim the most prestigious title in American polo. Made possible by the acceptance of individual team entries, the seven new teams (Aspen Valley Polo Club, Audi, Casablanca, Grand Champions Polo Club, Santa Rita Polo Farm, Sol de Agosto, Polo Training Foundation) joining the competition will bring the total to an all-time high of 20 teams for the first time in the tournament's history. Significantly increasing the difficulty of the U.S. Open Polo Championship® field with the addition of four 10-goalers, the final leg of the competition will showcase the talents of nine 10-goalers. Reigning GAUNTLET champion Gonzalito Pieres (Grand Champions Polo Club) will compete directly against his brother and former Pilot teammate Facundo Pieres for the first time since the series inception.

Doubling the prize money from the previous two tournaments, the winning team of the U.S. Open Polo Championship® will be awarded $100,000. In keeping with the spirit of philanthropy, U.S. Polo Assn. will provide a $2,500 donation to the finalist teams to be donated to a polo charity of their choice.

The list of participating teams in their newly announced tournament brackets are available below:

Please note, the USPA Gold Cup® semifinalists were seeded into separate brackets. Bracket I plays within the bracket. Bracket II plays cross bracket with Bracket III. Bracket IV plays within the bracket. Bracket V plays cross bracket with Bracket VI. Each team will play three games in bracket play. After bracket play, teams are ranked 1-10 on their side (Side A: Bracket I, II, III) (Side B: Bracket IV, V, VI). Tied teams that did not play each other will go to a one-man shootout. The top three teams from each side go directly to the quarterfinals. Fourth and fifth from each side have a playoff. Side A fourth and fifth draws from Side B fourth and fifth. Playoff winners advance to quarterfinals.

Bringing the 2022 GAUNTLET OF POLO® to a close, the U.S. Open Polo Championship® will be contested March 29-April 24. All Sunday featured games will be held on the prestigious U.S. Polo Assn. Field 1.

The U.S. Open Polo Championship® will be livestreamed on Global Polo TV's (GPTV) OTT platform, accessible on GlobalPolo.com and on major apps including iOS, Android, Roku and Amazon FireTV. The final will also be available as a post-produced show on the ESPN family of brands. Please check local listings for air times or visit espn.com to watch on-demand.

New in 2022, the Global Polo Pass annual subscription has replaced the previous pass options and will include access to all livestreamed USPA Official Events, select international events and much more. All USPA members receive the Global Polo Pass free with a paid 2022 membership. Special offers are available at www.globalpolo.com.

The United States Polo Association was organized and exists for the purposes of promoting the game of polo, coordinating the activities of its Member Clubs and Registered Players, arranging and supervising polo tournaments, competitions and games, and providing rules, handicaps, and conditions for those tournaments, competitions, and games including the safety and welfare of participants and mounts. Founded in 1890, the USPA is the national governing body for the sport of polo. The USPA is currently comprised of more than 200 member clubs with thousands of individual members and oversees 40 national tournaments. For more information, please visit uspolo.org.

U.S. Polo Assn. is the official brand of the United States Polo Association (USPA), the nonprofit governing body for the sport of polo in the United States and one of the oldest sports governing bodies, having been founded in 1890. With a multi-billion-dollar global footprint and worldwide distribution through some 1,200 U.S. Polo Assn. retail stores, department stores, sporting goods channels, independent retailers and e-commerce, U.S. Polo Assn. offers apparel for men, women, and children, as well as accessories and footwear in 194 countries worldwide. Ranked the fifth largest sports licensor in License Global magazine's 2020 list of "Top 150 Global Licensors," U.S. Polo Assn. is named alongside such iconic sports brands as the National Football League, the National Basketball Association and Major League Baseball. Visit uspoloassnglobal.com.

USPA Global Licensing Inc. (USPAGL) is the for-profit subsidiary of the USPA and its exclusive worldwide licensor. USPAGL manages the global, multi-billion-dollar U.S. Polo Assn. brand and is the steward of the USPA's intellectual properties, providing the sport with a long-term source of revenue. Through its subsidiary, Global Polo Entertainment (GPE), USPAGL also manages Global Polo TV, the world's leading digital platform with polo and lifestyle content, and global television broadcasts on ESPN and beIN Sports. Learn more at globalpolo.com.

The International Polo Club Palm Beach (IPC) is the premier polo destination in the world, hosting the largest field of high-goal teams and the most prestigious polo tournaments in the United States. Polo enthusiasts descend upon Wellington, Florida, each winter season to enjoy their love of the sport at the most prominent polo facility in the country. The 2022 Palm Beach Polo Season opened on Sunday, January 2, and concludes 16 weeks later with the U.S. Open Polo Championship® Final on Sunday, April 24, 2022. Learn more at www.internationalpoloclub.com.