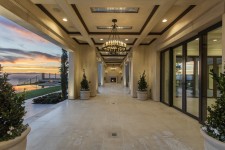 “We’re proud to be part of such an expansive and landmark project,” said Gerald Olesker, founder and CEO of ADG Lighting. “The Newport Coast is a spectacular and beautiful part of Southern California, and it’s a privilege to be practicing our craft in such a renowned area.” This project is one of over 150 homes Olesker has completed in Newport Coast.

“As an architect, with so much thought and careful attention applied to composing a custom home, it’s a joy to work with Gerald on lighting fixtures that truly complement our architectural design,” said Richard Krantz, AIA Architect and founder of Richard Krantz Architecture. “He studies and understands the architecture, and his resulting creation contributes exceptional enhancement and just the right finishing touch to a great home."

The expansive project was masterfully constructed by Iraj Roohani, president of Pelican Developers. Roohani likes having custom lights in his projects, and enjoys collaborating with Olesker. “He is very detail-oriented and stands behind his work,” said Roohani. “He’ll go through the clients’ needs in order to be cost-effective with the project.”

The project included work from several other tradesmen, including Erwin Gutenkunst, president of Neolithic Design, who provided the fireplaces throughout the property.

20/twenty Publishing is a leading provider for self-publishing authors. With our wide range of packages and services, we provide the tools and expertise you need. Dreams become reality.