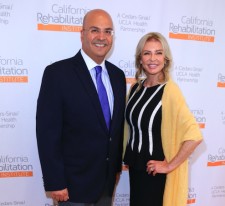 AFT was founded by philanthropist Laura T. Sharpe, who is a trauma survivor herself and selflessly wants to help other trauma survivors to be empowered, inspired and healed.

AFT and CRI are the main sponsors for this event. Additional sponsors are Buiced, Coco Taps, Sharpe Interior Systems, Sur le Mur, Moby Arts, Bezgraniz Couture, and LA Fashion Week. "Live with Ford and Vida," which is co-hosted by celebrated actor Ford Austin and noted fashion blogger and actress Vida Ghaffari, is proud to be a media partner for this event. Austin is a trauma survivor as well as an Ambassador for Artists For Trauma and an inspiring success story. "I feel very blessed to have been embraced by Artists For Trauma and Laura Sharpe. We hope that with the support of AFT, we can shine a bright light of hope on the spirits of all trauma survivors and those overcoming PTSD," said Austin.

Source: The Williamson Management on behalf of Artists For Trauma