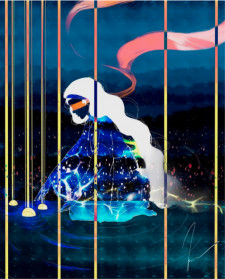 NEW YORK, August 30, 2021 (Newswire.com) - The sports memorabilia and NFT markets continue to break trading volume records in 2021, and now a rare non-fungible token created by Naomi Osaka will go up for sale, according to promoter Cool Media PR.

In April, Osaka and her sister, Mari Osaka, dropped a six-piece collection of 1-of-1 NFTs. The NFTs were individually auctioned on retail marketplace Basic.Space, and they collectively sold for nearly $600,000. One of the editions was purchased for $200,200, which, to date, is the highest single NFT sale by a professional tennis player.

Now, the owner of the sixth and final Osaka NFT is putting the piece of digital artwork up for sale, hoping to capitalize on the favorable timing of the booming NFT market and the start of the U.S. Open tennis tournament this week in New York.

One of the two major credit card companies bought a rare CryptoPunk last week for more than $165,000 in Ethereum, with the sole reason of adding to its "collection of historic commerce artifacts."

"This is an extremely unique piece, and the story behind it brings a lot of value to the future of sports memorabilia collecting through NFTs," NFT expert and founder of CryptoStache.com, Shea Newkirk said of the Osaka artwork for sale.

The NFT is titled "Finding What Was Lost," and Osaka's sister told HYPEBEAST.com that this edition was Naomi's favorite of the six. The artist caption by Mari reads:

"While she may occasionally lose her way, Naomi always manages to find herself back on the path she has been searching for."

All of the NFTs are signed by both Naomi and Mari. The NFTs were created on the Flow blockchain, which is the same blockchain that produces NBA Top Shot's non-fungible tokens.

Interested parties can view and place an offer on the NFT here: https://basic.space/auctions/finding-what-was-lost

For more information contact Cool Media PR at the address below.