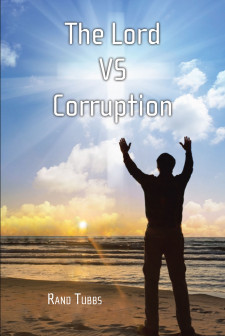 NEW YORK, January 20, 2022 (Newswire.com) - Fulton Books author Rand Tubbs, a happily married man, a fervent believer of Christ, a successful businessman; has completed his most recent book "THE LORD VS CORRUPTION": a compelling journey of Rand Tubbs whose search for his son opened his eyes to the lies and deception in the justice system. After being sick for more than three and a half years, with three near-death experiences in between, Rand Tubbs was guided by the Holy Spirit and told him about a son he bore from a one-night stand. Join him as he continues to fight for justice, truth, and his place in the life of his son, Justin.

"This is a true story of how a young man in his prime becomes sick with an undiagnosed illness now known as chronic fatigue syndrome or CFS, which is characterized by extreme fatigue and can't be explained by any underlying medical condition. There is still no cure to this torturous disease. Most people die within ten years of contracting it. All doctors and eventually all friends and family agree that he is manic-depressive and just write him off. Troy, his best friend from high school, leads him to the Lord and prophesies his miracle healing. During his three and a half years of sickness, he has three near-death experiences. In one, it is revealed to him that some lady from a one-night stand had his son. About fifteen years later, he starts having visions of how to find his skinny-legged son, visions involving police corruption."

Published by Fulton Books, Rand Tubbs' book is a powerful account proving that Jesus heals. He, who was once a lukewarm Christian, has received enlightenment through God's extraordinary way of communicating.

His peculiar life experiences are a great example that a spiritual realm exists on Earth and spiritual beings are here to serve as beacons.

Readers who wish to experience this gripping work can purchase "THE LORD VS CORRUPTION" at bookstores everywhere, or online at the Apple iTunes store, Amazon, Google Play or Barnes and Noble.

Eva-Maria Frank's New Book 'A Miracle for Evi' is a Delightful Piece About Prayers, Faith, and Miracles
Fulton Books - May 19, 2022

Nanette Gardner's New Book 'Thirteen Percent' is an Insightful Read Discussing the Misbehaviors of Some Blacks That Harm the Image of African Americans as a Whole
Fulton Books - May 19, 2022

Lawrence Ripp's New Book 'The Baron of Bubble!' is a Lovely Flight Into a Kingdom Filled With Beauty, Fun, and Bubbles.
Fulton Books - May 19, 2022