Racing for a Drug-Free Community

Annual Clearwater, Florida, race kicks off a drug-free holiday season. The Church of Scientology has been a proud supporter of the event for the past 28 years. 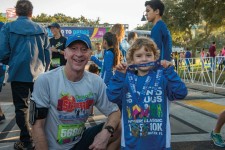 Clearwater, FL, December 23, 2016 (Newswire.com) - More than 1,900 runners joined in the 28th annual Say No to Drugs Holiday Classic December 17 to promote drug-free living and raise community awareness of the dangers of drugs.

Runners lined up for the race and the 1-mile run for kids at Clearwater’s Coachman Park, and the 5K and 10K runners headed for Memorial Causeway and Clearwater Beach.

There was also a “finisher’s” medal, race T-shirt and the famous Say No to Drugs pancake breakfast for all runners.

Clearwater City Council Member Bob Cundiff announced the winners in each category (ages 7 to 80) and handed out the prizes.

The Florida chapter of the Foundation for a Drug-Free World supported the race with a booth, copies of their Truth About Drugs booklets for all the runners and onlookers, and a 35-runner team to race in the event.

More than 4,000 copies of Truth About Drugs booklets were distributed.

Drug-Free World partners with civic and nongovernmental organizations including more than 1,200 police departments in the United States. Through its worldwide network of volunteers and partnerships, it has distributed 8 million copies of Truth About Drugs booklets over the past year— more than 80 million copies since the booklets were first published in 2006.

Source: The Church of Scientology