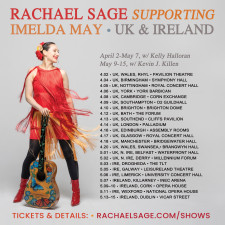 NEW YORK, March 28, 2022 (Newswire.com) - Rachael Sage has released an official video for "engagement" from her collaborative musical/spoken word record Poetica, from MPress Records, just in time for her return to the UK and Ireland supporting Irish Folk/Rockabilly singer Imelda May on her Made to Love Tour. Opening on April 2, the six-week tour will voyage all around the British Isles, visiting the likes of Dublin's Vicar Street, Edinburgh's Assembly Rooms, and London's Palladium. The video premiered in Skope Magazine (U.S.) and Essentially Pop (UK), and was featured in the acclaimed Dance Magazine.

Sage elaborates, "Imelda is everything I admire and strive to be in an artist: musically accomplished, heartfelt, an incredible singer, performer, writer, dynamic, eclectic, collaborative, and equally importantly she is extremely mindful, compassionate, inclusive and stands up for her beliefs. She is a strong, courageous, adventurous artist who will not be defined by any one genre, one who continues to change and follow her muse wherever it leads."

Watch the video for "engagement"

"engagement", from Poetica's recent self-titled debut, is a striking collaboration between singer-songwriter/musician/poet/producer Rachael Sage and Grammy®-nominated cellist Dave Eggar, with a featured performance by world-renowned klezmer clarinetist David Krakauer. The stunning new video features contemporary Broadway dancers Khadija Griffith ("King Kong") and Ryan Steel ("An American In Paris") interpreting this clarinet and string-drenched spoken-word track with emotional, semi-improvised movement. Directed by choreographer and filmmaker Sarah O'Gleby (whose credits include The Tony Awards, various Broadway shows and Jimmy Fallon), and edited by photographer and video creator Tom Moore, the black-and-white clip is equal parts moody, beautiful and heart-wrenching, as we witness two individuals struggling to connect and comfort one another through the various stages of a relationship.

Though largely abstract, the dance component effectively supports Poetica's somber lyricism, and the video's rustic Hudson Valley location provides a perfect backdrop for this piece, which is at its core about the trials we put each other through in order to forge and sustain authentic connection. Now more than ever, "engagement" inspires us toward understanding ourselves more deeply by creating a striking visualization of perhaps the most sensual act of all: listening.

Sage explains, "It was so exciting to work with Sarah O'Gleby on the 'engagement' video. Her background as a choreographer is wildly impressive, but when we became aware of her working now as a director, it seemed like a perfect opportunity to collaborate. The chemistry of our dancers - Khadija Griffith and Ryan Steel - was immediately striking, and they were both so brave in conveying the vulnerability this material required. It was a pleasure to work with this dream team, and shooting in the gorgeous Hudson Valley added an element of magic that Sarah masterfully captured, and Tom Moore brilliantly edited."

MPress Records Releases A Fragile Tomorrow's Track/Video, 'Lost in Art', Ahead of Forthcoming Album
AFT's album, It's Better That Way, Out July 15
MPress Records - May 16, 2022