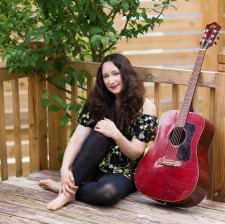 NEW YORK, May 3, 2022 (Newswire.com) - MPress Records artist Rachael Sage released an official video of Neil Young's seminal song "Ohio" to commemorate the tragic event which took place at Kent State University on May 4, 1970. Filmed at the Carriage House in CT (directed by Michael Flanagan and produced by Nick Clark), the performance is a deeply heartfelt version of the song, spurred on by the situation at Kent State and current events. The video premiered in Americana Highways.

Watch the video for "Ohio"

The video performance comes out just as Sage returns to the UK and Ireland supporting Imelda May on her Made To Love Tour. Opening on April 2, the 6-week tour will voyage all around the British Isles, visiting the likes of Dublin's Vicar Street, Edinburgh's Assembly Rooms, and London's Palladium.

Sage explains, "Neil Young has always been among my favorite songwriters. For me, he epitomizes empathy and social consciousness through art and it was an honor a few years ago to record a version of his song 'Helpless' with Judy Collins. I've had this video - recorded live from Carriage House Studios - in the 'vault' for a while, but with everything going on in Ukraine and the horrors of war and gun violence in America abounding, it felt like an apt time to share it. At its essence, the song to me represents compassion and not turning a blind eye to suffering - something that can happen all too easily. We must never become numb to terror and violence, whatever the source. I'm grateful Neil Young continues to be a beacon reminding us of that ongoing."

Sage elaborates about the tour, "Imelda is everything I admire and strive to be in an artist: musically accomplished, heartfelt, an incredible singer, performer, writer, dynamic, eclectic, collaborative, and equally importantly she is extremely mindful, compassionate, inclusive and stands up for her beliefs. She is clearly a strong, courageous, adventurous artist who will not be defined by any one genre, one who continues to change and follow her muse wherever it leads. Touring with Imelda is an extremely inspiring experience."

MPress Records Releases A Fragile Tomorrow's Track/Video, 'Lost in Art', Ahead of Forthcoming Album
AFT's album, It's Better That Way, Out July 15
MPress Records - May 16, 2022