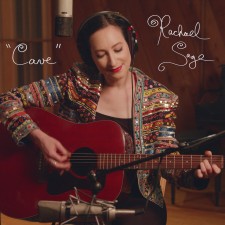 NEW YORK, October 13, 2020 (Newswire.com) - ​​​​MPress Records recording artist/label owner Rachael Sage has released a new video for her song "Cave" from her critically acclaimed album, Character. Premiered by Stereo Embers in the US and OriginalRock.net in the UK, the intimate video clip – filmed at Carriage House Studios – is punctuated by Rachael's signature calligraphic handwriting and original artwork.

Penned by Sage as a teenager, "Cave" was rediscovered during her 2018 recovery from cancer while she was sifting through an old box of lyrics. Rachael reveals: "I wrote this song while I was in college, where I fell hard for someone who was definitely not ultimately 'healthy' for me. It was a very formative experience and left me with a lingering fear of being manipulated or rejected for who I actually was. When I sing it now, the song reminds me to revere authenticity and honesty in all my relationships — and to fully embrace unconditional love." The minor, Eastern European flavor of serpentine string and accordion riffs perfectly mirrors what Sage describes as “a complete loss of self” during this difficult time.

Sage – who has been performing the song regularly via her weekly livestreams since March – says she has been touched to receive feedback from fans who have interpreted its stream-of-consciousness lyrics as "reflecting our collective emotional isolation during lockdown."

Art-directed by Sage, directed by longtime collaborator Nick Clark, and animated by Daniela P. Solomon, the clip utilizes playful animation to bring her handwriting and signature line-drawings to life, as though we are inside Sage's psyche. The result is a unique video that merges acoustic performance with an innovative approach to socially-distanced video-making. Sage, who has released 14 albums on her own NYC based MPress Records, is also a visual artist who has exhibited her artwork at various galleries throughout New York City.

The songs on Character were originally composed as a meditation on gratitude in the midst of her own cancer recovery, but have taken on new resonance during Covid-19 and recent protests against inequality, with themes woven through the album that reflect upon gratitude, optimism, and defiance - all which define what comprises character.

About Rachael Sage: Singer, songwriter and entrepreneur Rachael Sage has shared stages with artists such as Lucius, Judy Collins, A Great Big World, Sheryl Crow and Melissa Etheridge. In addition to being a Billboard-charting musician and producer, Sage is a philanthropic advocate who has raised money for a wide range of causes, including Foundation for Women's Cancer, WHY Hunger, American Refugee Committee, Memorial Sloan-Kettering Hospital and National Network For Youth (NN4Y). She is also the founder of MPress Records, a unique boutique label launched two decades ago which has released over 20 of her own albums and EP’s, while maintaining a diverse roster of folk, pop, rock and country artists including Seth Glier, Grace Pettis and A Fragile Tomorrow.