Race for "Fastest in the Data Center Industry" 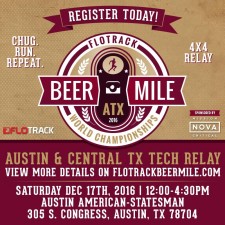 This is exactly the type of event we like to be involved in. We have many outstanding athletes who work in our Industry. What a great opportunity to participate in some healthy competition, but ultimately reflect the fellowship shared among those in the Data Center Industry.

Get your team of four together and register here: https://flocasts.wufoo.com/forms/m1l7ubs11lp3pwb/

The motto of the race: Chug. Run. Repeat.

The Beer Mile is an event that has deep roots within the running community, but historically was only held behind the scenes. In 2014, FloTrack introduced the first professional event and World Championship to a sport that was previously underground and in many ways unofficial.

FloTrack's Beer Mile 4x4 Relay Race is now becoming a mainstream sports event, attracting professional athletes from around the world to compete in this unique race.

The FloTrack Beer Mile World Championships returns to downtown Austin on December 17th, bringing together the best beer milers in the world for a shot at the sport’s largest prize purse and this year’s world title.

This year, NOVA has challenged the Data Center Community to bring at least 10 teams to compete for the honorary title of "Fastest in the Industry." Come connect with NOVA and other Data Center Industry Companies at the NOVA tent for some fun and festivities.

Think you have what it takes? Anyone is welcome to participate, simply put together a team of four, who want to combine two great pastimes, drinking beer and running. Register your team here: https://flocasts.wufoo.com/forms/m1l7ubs11lp3pwb/

Admission is free to spectators, so all are encouraged to come enjoy beer, festivities, and cheer your team on to victory.

Our mission is to be the most sought after Data Center Retrofit and Expansion expert in the industry!