Raab Sales, Inc. Celebrates 60 Years of Outstanding Equipment and Service With a Buy 2, Get 1 Free Online 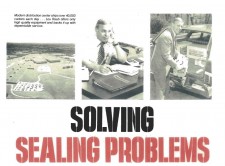 LENEX, Kan., August 6, 2018 (Newswire.com) - 018 – today marks the 60th anniversary of the founding of Raab Sales, Inc., an industrial equipment supplier with clients all across the greater Kansas City area and throughout the Midwest at large.

Lou had great relationships with all of his clientele, we have letters from clients saying how blown away they were by his dedication. One even cc'd a letter they had sent telling their current supplier in no uncertain terms that they were unhappy and don't know why they ever left.

Soon, Raab had the idea to go into business as an independent distributor. He formed the Raab Sales Company in 1958, with the Marsh Electric Tape Dispenser as his best-selling item. In 1962, Raab had made the RM Jackson Company so many sales that they recognized him as their exclusive distributor in the Kansas City region, naming him a “Factory Authorized” equipment dealer.

Between 1975 and 1979, the Raab Sales Company officially became a family business after hiring Lou Raab’s sons Michael, Steve, and Mark.

1991 marked the year that the company grew beyond its office based in the home of Lou Raab. Its headquarters were moved to a combination warehouse and office complex in North Kansas City, MO.

Lou Raab retired in 1997, appointing Mark Raab President of the company with Steve Raab as Vice President, and Tom Raab – the youngest of the brothers – as the Company Secretary.

After just five years, the new management had grown the business to the point where it needed to move again. In 2002, Raab Sales, Inc. moved to its current complex in Lenexa, Kansas.

As the company grew and evolved, Mark Raab came to understand that his company’s service model and integration expertise could make him an industry leader. He was a founding member of the Product Identification Network (PIN) in 2005, forming a trade network and establishing standard policies that would allow industrial operations to receive the same level of service nearly anywhere in the world.

No matter how large or advanced Raab’s operations have gotten, the company has stayed true to the vision of its founder, Lou Raab.

“Lou had great relationships with all of his clientele,” reflects Raab Sales, Inc. current President Mark Raab. “We have letters from clients saying how blown away they were by his dedication.” Mark Raab says that one client “even cc’d a letter they had sent telling their current supplier in no uncertain terms that they were unhappy and don’t know why they ever left Raab.”

In celebration of the company’s anniversary, QuickShop customers can buy any 2 eligible items and receive a third item free when using the code “B2GO60.”