At a workshop presented by the Scientology Volunteer Ministers South Pacific Goodwill Tour, 299 Quezon City police learn to administer Scientology "assists" to help constituents who are injured, disoriented or traumatized at accident or disaster sites. 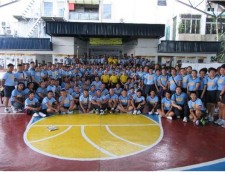 Quezon, Philippines, August 2, 2016 (Newswire.com) - Police are trained to control populations in times of civil disorder and natural and manmade disasters, but they often find themselves at a loss when faced with “human factors”—the confusion and disorientation people experience at times like these.

Lacking the skills to help when this occurs, police are limited in their ability to restore order when doing so is critical.

Scientology assists are techniques developed by Scientology Founder L. Ron Hubbard that address the emotional and spiritual aspect of stress and trauma. Learning that the Scientology Volunteer Ministers use assist technology to help in these situations, the Quezon City police chief was very interested.

And when he found out that the Volunteer Ministers have trained their partners, such as Mexico’s renowned Los Topossearch and rescue team and Colombia’s famous risk management and disaster response organization CINAT—National Circle of Aid Technicians—to use these techniques, he arranged for the Volunteer Ministers Goodwill Tour to train 100 Quezon City police.

In the end, 299 police officers attended the seminar. It began with an invocation by the police chaplain and an introduction and welcome from the police personnel chief.

In appreciation for their help and recognition of the value of the techniques they learned to improve their service to the community, the Quezon police ended the program by presenting a plaque to the Volunteer Ministers Goodwill Tour.

Whether serving in their communities or on the other side of the world, the motto of the Scientology Volunteer Minister is “Something can be done about it.” The program, created in the mid 1970s by L. Ron Hubbard and sponsored by the Church of Scientology International as a religious social service, constitutes one of the world’s largest international independent relief forces.

Read the article on Scientologynews.org.