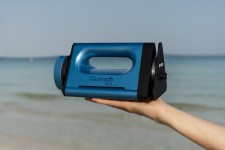 LONDON, July 21, 2020 (Newswire.com) - Quench Sea, a handheld device that instantly turns seawater into fresh drinking water using manual power, has surpassed its funding goal on crowdfunding site Indiegogo by over 700 percent. The portable desalination device - currently available from as little $60 - will now go into full production and the first units are set to ship in February 2021.

To accommodate demand, the company has extended its Indiegogo campaign until July 29 - meaning there's still a chance for sailors, campers, hikers, survivalists, preppers and travelers to back the project at the reduced campaign price. An extra water filter worth around $10 is included with each purchase.

There is also still opportunity to make a significant dent in the global water crisis. Quench Sea is donating one device to humanitarian projects such as Project Maji for every device bought during its crowdfunding campaign. It hopes to donate over 100 million units by 2027.

Quench Sea is capable of making up to three litres of drinkable water per hour. The handle-powered unit fits into a small bag; simply pump it for as long as is needed to provide the volume of clean water desired. You can watch how it works here and an independent verification video is here.

"As well as being an ideal survival tool for adventurers, Quench Sea can be delivered at scale in a humanitarian crisis," said Lee King, founder and CEO of Hydro Wind Energy. "Every unit sold will help to get one of these devices into the hands of charities focused on water scarcity and distributed to where they're needed most."

Two-thirds of the world's population live in areas plagued by water scarcity and more than two billion people live without access to clean water. Water scarcity is also a growing problem for many developed nations. Quench Sea can be stored as an emergency device for homeowners living in coastal regions, where natural disasters such as hurricanes, earthquakes and droughts can have a short term impact on access to clean water.

Based in London and Dubai, Hydro Wind Energy is a tech startup developing a disruptive technology to help solve three of the biggest challenges of the 21st century: low-cost clean electricity, grid-scale energy storage and water desalination at scale. For more information visit https://hw.energy.